The Best Board Games For Christmas 2016 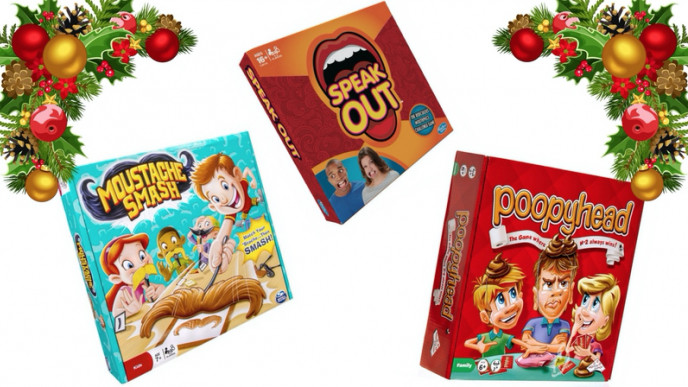 Board games are BIG business these days and they're getting more creative than ever, with concepts that are as ridiculous as they are hilarious. Last year, the sell-out game Pie Face -- where the object of the game is literally to avoid getting a pie in the face -- had many shaking their heads. This year, Hasbro's latest game, Speak Out -- a game that has its players inserting dental headgear into their mouths, while competitors try to figure out what the heck they're trying to say -- is looking to top the success of Pie Face.

We took a gander at this year's top sellers and reviewed as many reviews as we could get our hands on, and we've made some predictions about which board games we think will find themselves under Christmas trees this year. And sure, Pie Face and Speak Out are on that list, but there's a heck of a lot more out there. From Poopyheads to Exploding Kittens, we've got you covered.

Have you ever been to the dentist and had to wear one of those mouth pieces to keep your mouth open while they poke around? Hasbro's Speak Out Game has designed a game around them.

This might sound familiar because this summer a YouTube phenomenon called "The Mouthguard Challenge" went viral where users uploaded videos of themselves doing simple tasks while wearing the guards. There was even a funny segment on The Late Late Show with James Cordon featuring Melissa McCarthy and Kristen Schaal. Seriously, look it up. It's too funny.

Anyways, if you're not convinced this game will be amazing (and humbling for all players), browse some of the YouTube vids and you'll probably come around. The bad news is that it's already basically sold out everywhere, but you can check out this list of stores that are carrying it.

There's nothing quite as timeless as a pie in the face, which is probably why the new Pie Face Showdown gamewill be just as, if not more popular than The Original Pie Face. The Pie Face Showdown ups the ante by turning a relatively simple spin-the-wheel and turn-the-crank game of chance into an adrenaline-pumping game of competitive button-smacking.

The basic idea is that whoever hits the button the slowest gets a pie-in-the-face. And for all those grown ups out there who don't hit the arcade as much as they used to, you might find yourself at a serious button-smacking disadvantage (which you might not mind too much, if you like whipped cream!).

Okay, so this one is not technically available yet, but when it is (and it will be very soon at Toys R Us), it's going to be a big thing. Sure, some might say that owning the original Pie Face is enough or maybe owning The Showdown will get you where you need to be on family games night, but what better way is there to round out a minion-movie marathon than playing this game? An obvious twist would be to take it next-level with a BANANA cream pie!

In this version, there a cutout of a Minion where you can place your pie-ready face to play -- and maybe take a selfie or two.

The price will probably be close the original version, but we can't be certain yet because it hasn't been released.

If there is anything that could rival the timelessness of a pie-in-the-face, at least when it comes to board games, it might be Monopoly. It's actually a challenge to get bored of this game, when its creators seem to come out with a new edition every year -- there are apparently hundreds. No really, we checked, there's over a thousand versions.

But, maybe this one is something special or it will be for fans of Pokemon! If that's you or your little one, you can find it at Chapters Indigo for $44.95.

Just in time for "Movember," this game has each player hold a moustache up to their face and "MASH that 'stache card" that matches their moustache. The fastest player gets the point. The challenge is that players trade moustaches throughout the game so you really have to stay on your toes (or your 'stache').

The game is for 3-6 players, for ages 7+, and is also great for selfies or photo booths if you want to take the 'staches' for a spin.

This game is available on Amazon for $31.76 with free shipping.

Like the storybook says, everyone poops! And it was probably with this in mind that the creators of "Poopyhead" devised their game.

Complete with a whoopy cushion and soft coiled poop headbands, the basic goal is to -- probably no different than your everyday life -- avoid wearing a piece of poop on your head. The ultimate toilet training guide, each player gets hand of cards that they have to play in the right order: Toilet - Poo - Paper - Wash your Hands. Seems simple enough, but if you bung it up, you end up having to wear the poop hat (or several).

If you don't mind toilet humour (literally), this could be a great game for your family. It'll also be sure to spark a whole lot of giggles from the kids (and if we're honest, the grownups too).

The concept of "exploding kittens" might be a little dark, but in all honesty, this game is a winner! It's a card game that brings together absurd ideas, like "pigacorns" and "all-seeing goat wizards," to create a kitty-powered version of Russian Roulette.

A good measure of whether your kids will like this game is if they like the kind of humour on the popular show Adventure Time. Anyways, this game will likely find its way onto many Christmas lists this year, and you can find it on Amazon for $25.00.