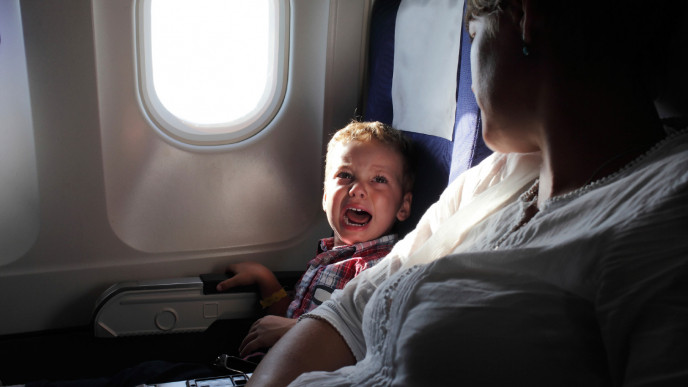 Edited to update: Thanks to one of our eagle eyed Bargainmoose readers for pointing out that this story we posted has had an excellent outcome after all, due to the outcry from parents across Canada! In a CBC News article, it states that Air Canada has since revised their policy. Air Canada has stated that they "automatically assigns seating without an advance seat selection fee soon after the booking has been made, either directly through Air Canada or through a travel agency, for parents and guardians who have indicated they are travelling with children on a Tango fare."

With summer holidays just around the corner, many Canadians have booked flights to travel to see family or go on a vacation. If you were going to be flying out on a several hour flight, how would you like to take care of a stranger's 2-year-old toddler who is sitting next to you on the airplane? Worse yet, how would you like a total stranger to be taking care of your own 2-year-old toddler while on a flight while you are seated several rows back? No way! Right?

It's absurd to think that your own child could be separated from you during an Air Canada flight from Vancouver to Toronto, or for any flight for that matter. But as Canadian couple Caley and Matt Hartney discovered after recently booking a return flight through Air Canada, unless an additional $40 fee was paid for seat selection, it was not guaranteed that their 2-year-old, Charlotte, would have a seat assigned next to either of them.

Matt Hartney, Charlotte's Dad, raises several valid arguments in a recent interview with CBC News, for why the current Air Canada ticketing system (relating to fees incurred for minors traveling with an adult for provisions to sit together) is flawed. Hartney mentions that the system won't allow a two-year old to book a seat on their own, (it has to be added to an adult's ticket.) Clearly, since the child is a minor and a particularly young one at that, they will need the care of a diligent parent while in-flight.

Airlines are obligated to show full fares including all taxes and other required charges, but it would seem that by default (because not all passengers on the flight want to pre-select a seat at an additional charge), the price shown in the total fare is without the seat selection fee added on. However, if the $40 fee is required to ensure a child is seated with his guardian, it is thereby a mandatory charge and should be disclosed as part of the total fare. At the least it is evident that the current system is not clear enough about requiring seat selection for the child ticket in order to be seated together with their parent.

Hartney's wife Caley explained to Air Canada that she's comfortable paying for both adults, but that a child should not have a reserved seat fee, given that a two-year-old should have to sit next to a parent. Reasonable thinking on her part and absolutely understandable. We wouldn't take a child into a restaurant and expect them to be seated at another table. Although it's not the same type of comparison, the point has merit.

There are many toddlers who would not feel comfortable in the least to be away from Mom or Dad in this situation. Many parents understand this, so would have to pay the mandated $40 seat selection fee. If a safety issue or crisis were to crop up it would be the parents who could best tend to their toddler, not a total stranger who may or may not even be up to task to try to assist. We can't assume everyone in society would be understanding enough or have the skills required to help a child out. Surely the flight attendants could also assist, but they are busy with various tasks so would not have the time to spend with your child.

Let's say you have paid for an adult ticket for a solo flight. All of a sudden, a 2-year-old toddler is plunked down beside you! You understood there could be crying babies and kids arguing amongst themselves on your flight, what you didn't sign up for was being someone's nanny! Can you imagine how awkward and uncomfortable it would be if the child was upset and crying, and you couldn't calm them down?

Essentially, it all boils down to this—why is there such a fee, and a hefty one at that, attached to a provision that should be standard?

If I were in the same situation as the Hartneys, I would have felt obligated to pay the additional $40 fee, just to have that guarantee in place for peace of mind! However, you can bet I would see about getting reimbursed for such a ridiculous charge. If it's too hard for the Air Canada ticket system to waive seat selection fees for specific groups of people who have a child with them, then at the very least, a refund system for the child's seat selection should be implemented. Parents are not asking for a free seat selection but they are asking for a guarantee that their seats will be together. This should become protocol when looking at the fact that you have a minor traveling with an adult.

An email issued by Air Canada stated: "...the additional $40 seat selection fees are only an issue on the airline's Tango Fares." Tango is designed for those not expecting flight changes or cancellations, but does offer the cheapest fares that they have available. Wouldn't these fares with children traveling with adults be quite a large part of their market, and wouldn't there be a substantial number of parents selecting these seat selection fees?

"The best way for customers travelling on a Tango fare to guarantee specific seat assignment is to purchase seat selection at time of booking for a nominal fee," the statement from Air Canada reads. A 'nominal fee' to me is not $40. Is it to you? Some flights under an hour are as low as $100, so $40 sure is a large chunk of the total airfare in that situation!

Air Canada also stated, "In the event that customers have not pre-selected their seats, we have in place processes to reduce the possibility of being separated. We encourage parents to advise us that there are children in their party by completing the necessary fields when booking on aircanada.com. We also communicate to our travel agency partners the importance of collecting this information at time of booking. (Our safeguard process to reduce the possibility of being separated onboard will only work as designed if we are aware that children are travelling.)"

I believe that for the most part, children are seated with their parents on an Air Canada flight regardless of whether or not they have paid the $40 seat selection fee. The above statements by Air Canada indicate they are trying to seat minors with their guardians anyway, which is great. So why the fee? Something about being required to pay extra to guarantee a necessity (being seated together) for families who book flights, seems off to me.

It might be of merit for Air Canada to review their policy and consider the suggestion of issuing a refund to those parents who pay a $40 seat selection fee for their child who will be traveling with a parent, keeping in mind that this is not a fee paid toward further enjoyment during the flight. (Believe me, it's not always fun traveling on an airplane with your little one beside you.) It is a fee that parents are cornered into paying because of potential safety and security issues at hand for their child that could transpire if they were not able to be seated together during an Air Canada flight.

Bottom line—a parent and child who require the provision of sitting together should not be hit with an additional mandatory 'seat selection' charge of $40.