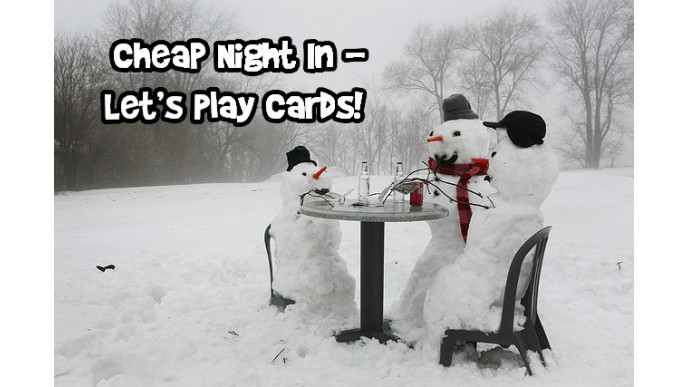 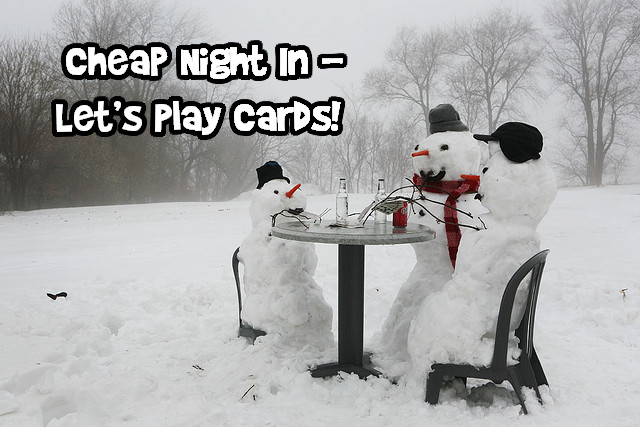 During this cold part of winter I often like to play cards with my family and friends. Cards are an inexpensive way to have a little bit of fun and have a few laughs. It is also a great chance to reach out to that neighbour across the street or get to know that coworker at the desk next to you.

Compare this night of fun with a standard night out to dinner for two at $50-$100 and up. Now compare this to a night at the movies for two starting at $25, which for a movie these days means smuggling in your own snacks and does not include 3D or any of the other movie extras. A night in with a deck of cards and a $10 bottle of wine sounds great for a fun night in.

Most people know the Bingo game that you play with cards and chips. This version of Bingo also goes by Bango or Hoy and you play with a standard deck of cards. Bring a bunch of nickels and dimes to play for cash, or divvy up some snacks like raisins and Smarties to be your currency.

Every player starts by adding something to the winner’s pot in the centre. Each player is dealt 5 cards face down. Ten cards are dealt face down in the centre. If any player has four cards of the same rank (four kings, four 3’s, etc.) all cards are re-dealt.

The dealer turns one card from the centre over at a time and all players discard any cards they have of the same rank without revealing their cards. For example if a king is called, all kings in player’s hands are then discarded face down in front of them. Play continues until one player is out of cards and yells Bingo. Each player must add to the prize pot for each card that is in his or her hand. The winner wins the entire prize pot and then the next round begins.

This game can accommodate many more players if you add additional decks of cards. A friend of mine hosts games with two decks of cards in play and up to 10 players. She says her son’s college fund is growing in her Bingo winning's bag. When you play with extra people the winning's pot can get big. For more details on other variations of this game, you can check out more rules at Pagat.

Hearts is a trick taking game that is fun to play with a crowd. Deal out 13 cards to each player. Immediately after the cards are dealt, you pass three cards to the player on your left or right depending on the hand. Each hand you alternate passing to the left or right for fairness. The person with the two of clubs leads the first hand also known as a trick. Each player must follow the suit led (diamonds, spades, etc.) and the highest card wins the round. Aces count high above the king card. If a player does not have a card in the same suit as was led, they can then play a heart card. A hearts card will always win the round unless someone plays a heart card with a higher value.

The player who won the last round/trick then leads the next round with any card. Since heart cards will trump any suit on a hand, you also cannot lead with a heart card until a hearts card is played in a previous round. The only exception to this rule is if the only cards in your hand are hearts cards you can then lead with a hearts card. Play continues until all cards are finished.

When we played at my house growing up, we always counted the number of tricks we won each round. The person who won the most number of tricks was the winner. I think we perhaps played that way because I was a kid and it was simpler. There are many variations to this game also and a much more complicated scoring system is more widely accepted with the game. Scoring typically includes accruing one point for each heart card taken and 13 points for taking the queen of spades. Players continue play until one-player reaches 100 points. The person who then has the lowest score is the winner. For full details and variations, you can check out the rules at Bicycle Cards.

This is the perfect game for when no one else wants to play or it is just too icy to go out. This game does not require any skill. It is perfect when you want to do something but do not want to think very hard. I like to play when I need a break from screen time. This is also a great game to teach kids.

Play continues until all cards are back at their correct stations which means you have won the game. If you flip over all four king cards and there is still other cards facing down, the game is lost. For more rules and variations, see the Wikipedia page for Clock Patience, another name for this game.

There are also lots of free apps and games online that you can play card games without having to have additional players. Pogo.com has a great selection of free card games you can play online with no friends needed for your game night. I personally would rather have a group of people sitting around my kitchen table giving each other heck while we play. The computer version is also a fun way to pass the evening but perhaps less social.

What is your favourite card game to play Bargainmoosers?