Buzz Lightyear to the rescue!
By Danielle Doiron, 8 months ago 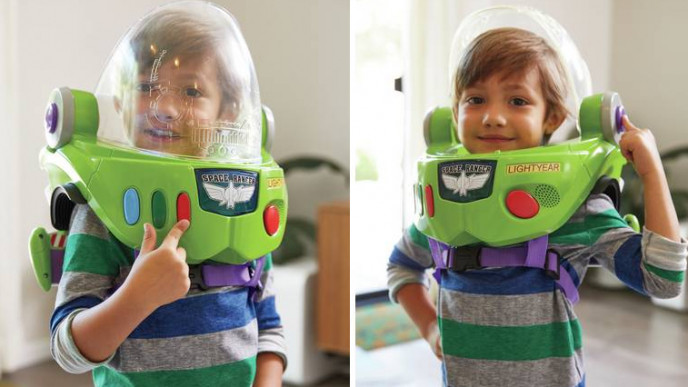 Update: It looks like Toys R Us Canada has removed this helmet from their site. You can still find it online in Canada at Chapters Indigo (for $79.99) and Walmart (for $79.97). We'll let you know if it comes back!

I almost didn't believe it when I first saw this, but it's true. The Disney Pixar Toy Story 4 Buzz Lightyear Space Ranger Armour with Jet Pack is not only in stock at Toys R Us Canada – but it's just $24.99!

If you haven't seen this toy around yet, this is a BIG deal. It's also sold at places like Walmart and Chapters Indigo – where it's about triple the price. So finding it for just under $25 is HUGE!

I'm honestly not sure if this is a typo or just a really great sale – but either way, I'd suggest you act fast. Because if it is a mistake, there's no telling when Toys R Us might jack up the price.

This is a deluxe helmet with an attached jetpack that looks just like the top of Buzz Lightyear's spacesuit in Toy Story 4. It's loaded with special features – but you might want to adjust the straps and secure the padding inside the armour so your little space explorers stay comfy when they start playing.

If you press the side button, the visor closes slowly – and makes sounds. Press the control panel's red button to light up the helmet and hear phrases from the movies. The jetpack engine even roars!

To complete the look, Toys R Us also sells this Buzz Lightyear Rapid Disc Launcher. It lights up, makes noise and comes with five discs you can launch the next time you need to defeat the evil Emperor Zurg.