The Disney Store: Buy One Plush, Get Second for $1 (Online or in Store) 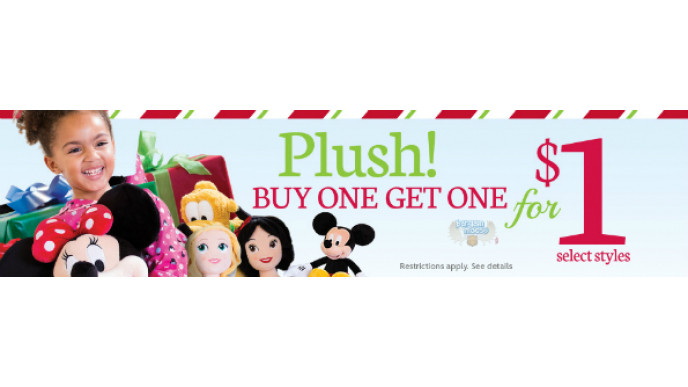 Get your favorite Disney character as a plush then get them a friend for only $1 at The Disney Store!

First off, The Disney Store is an American company, ships from the US, doesn't collect taxes, ships UPS and all that together means it'll cost a lot to order these online. You can do it but if you can get in to a physical store, it's a much better deal.

But shipping aside this is an awesome deal. You can pick up one of the plush toys available in this sale and get another for only $1. And these aren't the leftover toys from planes or some other failed Disney movie. I'm talkin' Lots-O'-Huggin' Bear, Mickey, Pluto, Stitch, Sully - a whole bunch of awesome characters. They even have some giant ones like a two foot tall Mickey Mouse.

There are a lot of good pairings too. Like you can get Mickey then pick up Minnie for $1. Nemo and Dory, Woody and Buzz, Mike and Sully. Lots of great options.

Like I said earlier, shipping is insane but is based on what you get and where you are so if you're feeling like dropping a bunch of extra money, go right ahead. Always a better deal to go to the store for this stuff though.