Now here's a blast from the past
By Danielle Doiron, 3 years ago 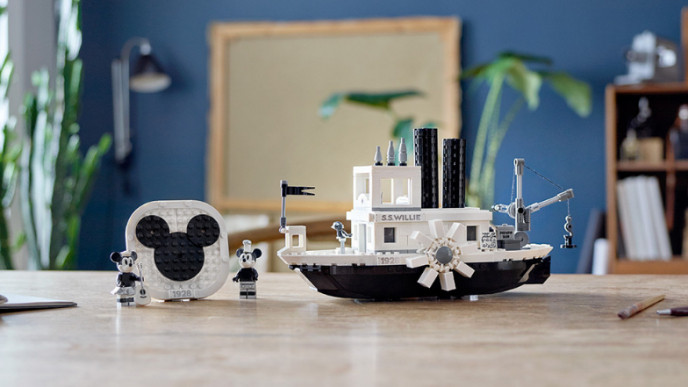 All aboard! Mickey Mouse turns 90 this year, so LEGO is going back to his roots. They recreated the iconic Steamboat Willie short into a LEGO set – and it's available now in Canada!

In 1928, Mickey Mouse made his screen debut in "Steamboat Willie" – which was also the first Disney film ever to have synchronized sound. And now, that short is immortalized in the LEGO Ideas Steamboat Willie set.

This is a LEGO exclusive, so you can only buy the kit (no. 21317) directly from LEGO Canada for now. But if it's anything like the other LEGO Ideas sets, we may see it elsewhere soon!

It's intended for builders who are at least 10 years old, and the entire thing is made up of 751 pieces. It's all in greyscale (like the original short film), and it comes with two new Mickey and Minnie minifigures. There are even moving steam pipes, rotating paddle wheels and a crane you can adjust!

When built, the steamboat stands at a little over 15 cm high, 26 cm long and 14 cm wide. It costs $119.99, and it will ship for free. And if you want to keep riding the nostalgia, check out the LEGO Ideas Flintstones set!