And the best part? The entire thing is motorized!
By Danielle Doiron, 2 years ago 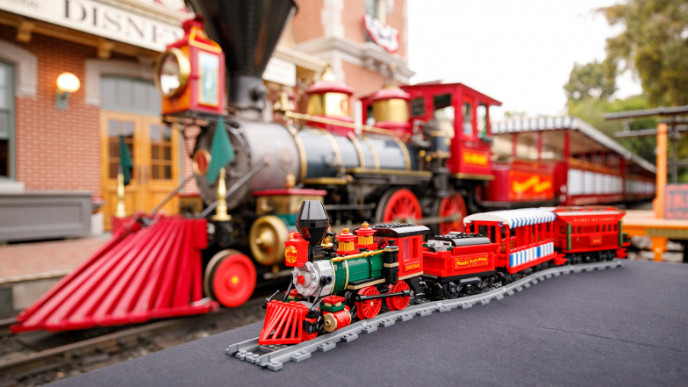 LEGO has been making Disney sets for a while now, but the two companies just teamed up to create something really special. It's a 2,925-piece motorized model of the Disney Railroad that runs through Main Street USA in their Disneyland and Disney World parks ... and it's coming to Canada next month!

The Disney Train and Station (set no. 71044) is intended for builders 12 and up, but I'm betting this is a set the whole family will love. I was never much of a LEGO fan, but even I'm excited about this one!

This LEGO train set comes with five minifigures: Micky Mouse, Minnie Mouse, Chip, Dale and Goofy, as well as almost 3,000 pieces. You might want to clear off your dining table (or maybe an entire corner of the living room) to put this thing together. It's a freakin' masterpiece, and you'll need the space.

It will officially be available on Sept. 1, 2019 for $379.99, but LEGO VIP members can pre-order the set as of this morning. If you're not a member yet, you can sign up here for free. And since it means exclusive access to sets like this before anybody else, why wouldn't you join? All you need is an active LEGO account.

Earlier in August, LEGO teased the set on their Instagram page when they released the first look at this new set. "All aboard! Take a magical journey with the new LEGO Disney Train and Station set, inspired by the iconic trains in Disney theme parks," the caption reads. They've since released a video on their Instagram feed that shows how the set works once you've put all 2,925 pieces together.

The news only broke a few days ago, and people are already loving it. One Instagram user commented "Well ... Here we go again. (Silently takes wallet out)" ... and honestly? All I have to say is SAME. A few commenters also wondered if we'd see LEGO sets modelled after Disney rides in the future. Guess we'll just have to see! In the meantime, the LEGO Disney Castle (set no. 71040) is back in stock for $399.99.