Let them know you're vegan!
By nadacolada, 3 years ago 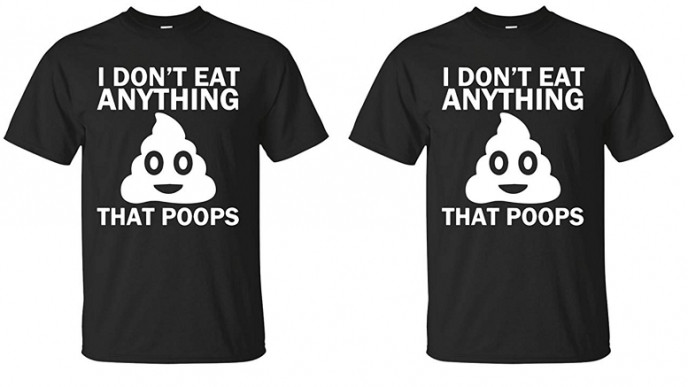 The vegan population of the world is expanding. If you're one and you want the world to know, then this humorous top is for you. The "I Don't Eat Anything That Poops" t-shirt will garner many smiles whenever you where it. Get yourself one from just $15.26 and let everyone know exactly what you're willing to put in your belly.

I Don't Eat Anything That Poops

What a way to say you're vegan... " I don't eat anything that poops". It's funny, and that's why we are digging this hilarious slogan top.

Made from 100% cotton, it's easy to wash, dry and won't irritate even the most sensitive of skins.

As well as this t-shirt featuring the vegan boasting slogan, it has a poop emoji on it as well - as if it wasn't funny enough.

If you're naughty, you could rock up to that dinner date, and watch as the host squirms at their lack of food choices for you.

The size availability is rather inclusive, starting from small, all the way through to 5XL.

If the t-shirt isn't your thing, then grab yourself a I Don't Eat Anything That Poops mug* instead. There are heaps of them on Amazon, and they would look just fab on your desk, at work.