Kids Love This Game! Where to Buy Don't Step In It 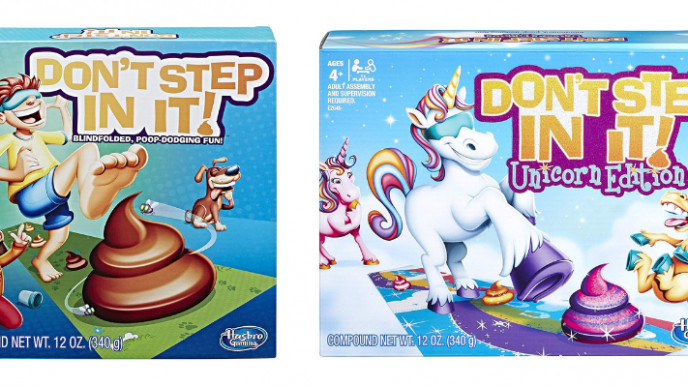 You might want to sit this one out if you're squeamish. But if you're ready to dodge some poop, this could be the game for you.

Don't Step In It is already one of the biggest games of the year, and it's definitely a great way to get you up and moving – and laughing – during your next family game night.

Players put on a blindfold and spin a spinner to find out how many steps they must take across the mat. There's just one catch. You have to dodge "poop" along the way!

And while it sounds gross, know that the "poop" is basically just plasticine that you shape into little mounds to place across the playing surface. A mold and four jars of dough are included.

If you're an Amazon Prime member, you can access the best price in Canada for the original game. Amazon Canada has Don't Step In It for $19.99. Just make sure you're signed in to get this deal!

Not a member? Don't fret. Walmart Canada has the game for the next lowest price ($24.93), and you can also find the original version at Chapters Indigo, Toys R Us Canada and a few similar shops.

But if you want to add a little glitter to the game, there's an option for you, too. There's also now a Don't Step In It Unicorn Edition, which is available at Walmart Canada for $24.93! It's currently sold out online, but you may still be able to find one in stores.