By Emma Kelly, 8 years ago 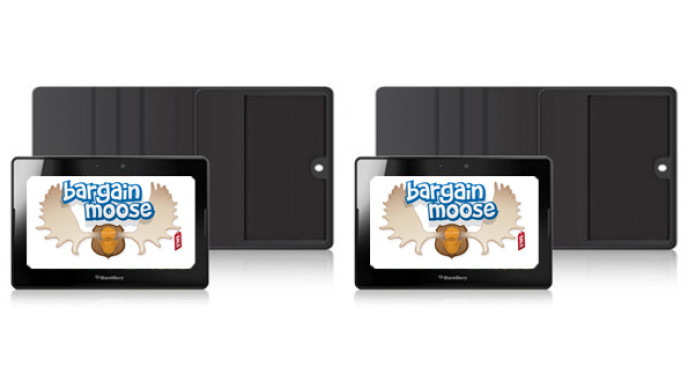 There have been a LOT of deals on the Blackberry Playbook over Christmas and the Boxing Week sales. I'm sharing details of another one now, but it's a bundle this time - the 16GB Blackberry Playbook and a leather convertible case, for only $224.87 at The Source Canada online.

For $224.87, you're getting the 16GB Blackberry Playbook tablet computer, plus a leather convertible case. The case alone retails for $50, and the tablet for $200+, so it's definitely a good deal if you're looking for both a tablet and a case.

For those of you yet to jump on the tablet bandwagon, you won't regret it. I bought an iPad about a year ago, and I wasn't suspecting that it would become such a large part of my life. My iPad goes everywhere with me; to cafés, when visiting family, and when visiting the restroom! While I don't use it for "work" purposes very much (other than checking on Bargainmoose when I need to), I find it is more of an entertainment device. I mainly use it for watching shows, playing games, etc. I reckon you'd be the same, if you bought a Blackberry playbook.

The leather case that comes in this Playbook bundle looks suspiciously similar to the iPad smart cover too...

Don't forget that you can order online from the Source, and collect at your local store for free (or pay extra for shipping).