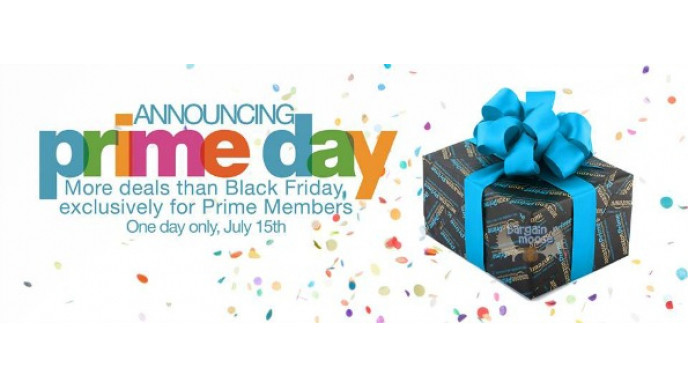 Amazon Canada's Prime Day is tomorrow, July 15th. Why should you care? Because it means some super hot deals for you, but there is a little catch. You have to sign up for Amazon Prime to see the deals. What's completely awesome about having to sign up for Prime is that you can get a free trial now and cancel it if you decide you don't want it later. Prime also gives you a ton of benefits along the way.

Avigayil has written about Prime a few times on Bargainmoose and this article about Amazon Family and this one about Amazon Student explain quite a bit.

Basically with Amazon Prime, you'll get:

You can sign up for a free 30-day trial of Prime today, which will allow you see all the hidden deals tomorrow. You will need a valid credit card to do so.  After your free trial is over, you'll be charged $79 per year for your subscription.

It is super easy to sign up, especially if you already have an Amazon account. I clicked one button to get my free trial. As Avigayil suggested, mark down in your calendar the date you need to cancel by. Here's the informationon how easy it is to cancel. If you sign up today, I would cancel on August 12th just to be safe. Or, you may love having Prime, especially with the convenience of not having to pay for shipping or get your total up to $25 each time and you'll want to keep it.

If you've already had a trial of Prime before, you may try another free trial if you haven't had one in the last twelve months. Don't go through where it says Get Started on Amazon's site. Instead, click only where it says Start Your Free 30-Day Trial. If you have trouble, you may be able to contact Amazon to get a new free trial set up. Get on this today as tomorrow may mean sitting on hold for longer than the deals are posted!

Here's the bad news: if you live in Quebec, there is no free trial, but you do get one month extra if you want to purchase Amazon Prime and take advantage of tomorrow's deals.

Some of the hottest deals expected tomorrow include:

Those are just a smattering of the deals to be had. Deals are starting as early as midnight PST and they are saying that there will be twice as many deals as there was on Black Friday. Its like Christmas in July! Be on Bargainmoose in the wee hours to see some of the hottest deals posted here!