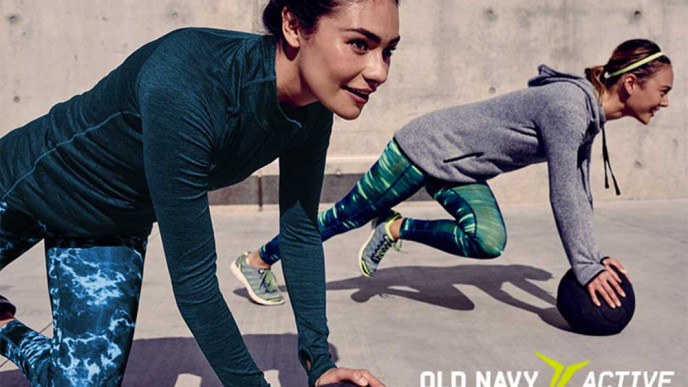 'Tis the season for getting back in shape – and for scoring HUGE deals on fitness gear! Right now at Old Navy Canada, absolutely all activewear is up to 50% off, and prices start at $5.24!

To get the best deals, you'll need to use a couple of coupon codes at checkout and make sure you pick up multiple items (which, trust me, really won't be hard to do).

Until 11:59 PM ET tomorrow, use the code BONUS at checkout for an extra 25% off your purchase and the code GYM for an extra 10% off when you buy four or more activewear items!

Take a peek at some of the best deals:

And since most of these are brand-new items, there are still full size runs left in stock – so if you act fast, you're almost guaranteed to find things that fit!

Just in time for back-to-school, Old Navy offered sale kids activewear from $2.79, plus an extra 30% off most items with the code BONUS. For girls, there were deals on tanks, shorts, bras and pullovers. For the boys, you could find deals on shorts, socks, tees and more. Sizes and styles sold out quickly though!

This event offered up to 50% off Old Navy activewear, with deals on tanks, hoodies, bras, leggings, t-shirts and more. Prices started at $5.99.

In this event, you could kit out the whole family with active wear from Old Navy, at a reduced price. They offered savings of up to 50% on sale items, plus an extra 20% discount if you were willing to buy an Old Navy gift card from Loblaws to use towards your purchase. You could buy tops from $7, shorts and sports bras from $10, and leggings from $17.

During this Old Navy active wear sale, all items were marked down by up to 40% off, and with the code NICESAVE, you could also score an extra 20% discount. There were tons of deals on clothing for men, women and kids activewear, with prices starting from $5.60.

For one day only, all activewear was half price with the code GETACTIVE. With the code, you could pick up kids clothing and tees from as little as $1.99.

This one day sale on Old Navy performance activewear offered items for sale from $5. On offer were tees, tanks, shorts, and even sporting underwear.

From Old Navy, activewear items are often excluded from coupon code discounts, but this time, codes were applicable on their active ranges too. With the promo code WOOHOO, you could get an extra 30% off anything. Plus, Old Navy active was already up to 50% off, and the code stacked on top of that deal. It was for one day only, and there were offers on many different items of active wear clothing and accessories.

This was a one-day only flash sale on Old Navy activewear, in which you could get an extra 50% off your order with the code FITFAM.

Old Navy had a special offer on activewear for men, women and kids. Prices started at $6, and you could pick up deals on hoodies, yoga pants, sweaters and more active wear items.

Here, Old Navy introduced a new line of activewear, and offered up to 50% off the range. Styles started in price from $9, and the deal ran for just over a week. Items on offer included capris, tanks, tees and more.

OLD NAVY PROMO CODE: Text this Old Navy coupon for $5 off your next $35 purchase