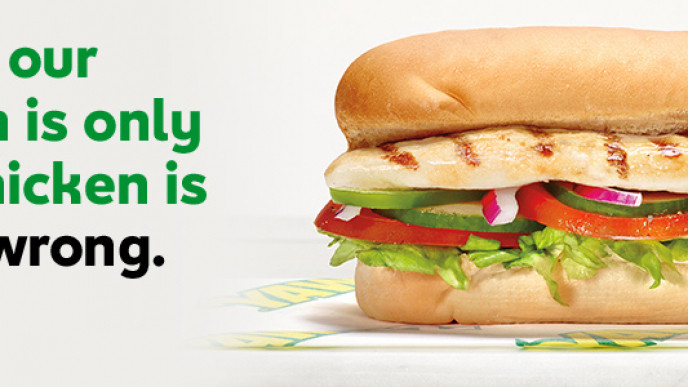 I pile the kids in the van and take them to Subway when I am too tired to cook. Subway gives me less mom guilt than some of the other fast food chains because it is healthy, right?

Maybe not. CBC Marketplace recently investigated fast food chicken. While the chicken at most chains was found to be almost all real chicken, Marketplace found that Subway's chicken was not just chicken.

Test results showed that Subway's oven-roasted chicken contained an average of 53.6 per cent chicken DNA and the chain's chicken strips measured up even worse at 42.8 per cent chicken. So what else is in there? The average piece of chicken in a Subway sandwich contains 16 ingredients. Some are flavor enhancing ingredients such as honey. Others are industrial ingredients designed to bind the chicken together and make it last longer and bring down the cost. One such ingredient is soy protein.

Subway responds that its sandwiches contain 100 per cent white chicken meat with only seasonings added and is demanding that the report be retracted. However, CBC maintains that their report is accurate and they aren't chickening out of the findings.

I guess it is time for me to dust off the slow cooker. What about you? Will you continue to order chicken sandwiches at Subway?