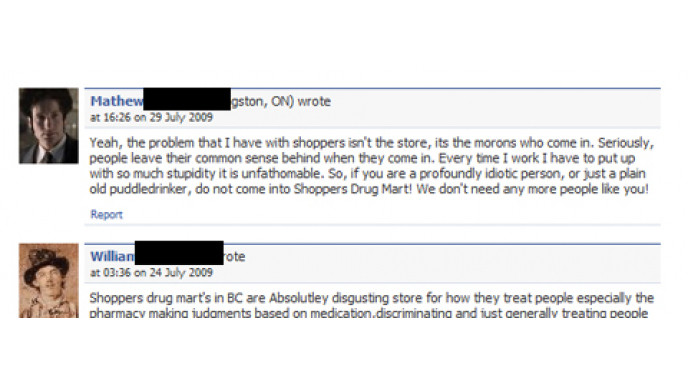 OK, I know my title was a bit rude, but I feel a bit angry after seeing some nasty comments on Facebook groups.

I was actually looking for some Canadian store's Facebook pages to join up to. Sometimes they communicate good offers through Facebook, offers which I could share with you guys on the Bargainmoose blog. But for some stores, I saw some nasty comments from employees, which I really do not think are appropriate.

Yeah, the problem that I have with shoppers isn't the store, its the morons who come in. Seriously, people leave their common sense behind when they come in. Every time I work I have to put up with so much stupidity it is unfathomable. So, if you are a profoundly idiotic person, or just a plain old puddledrinker, do not come into Shoppers Drug Mart! We don't need any more people like you!

Really Mathew? That's a lovely way to think of your customers.

What about Ryan over on a Sobey's employee facebook page? When referring to customers watching him pack their bags, he states:

What dicks. can they f*ckin help?

There's more fun in the Costco Canada facebook group too, where customers are referred to as idiots and assholes.

So folks, if you work for a major chain store, please don't vent your anger on Facebook. You're entitled to your opinion, but to share it with the entire world is quite unbelievable and wholly unprofessional.

I'm off to drink some puddles.