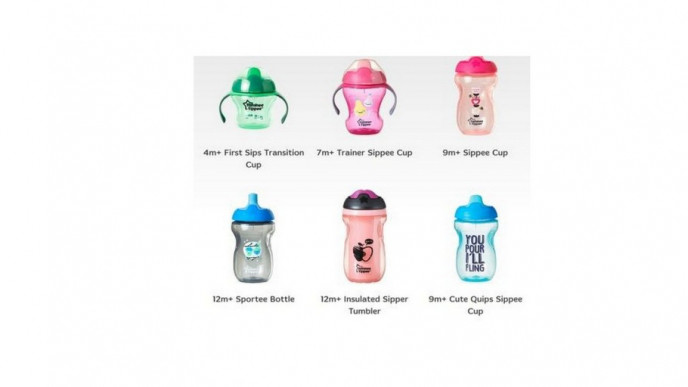 A recall has been issued on Tommee Tippee Sippee Cups, a popular model of sippee cups being sold in Canada, due to the risk of potential mould ingestion. Approximately 227,000 affected products were sold in Canada from December 2014 through May 2016.

According to the Healthy Canadians website, "Only Tommee Tippee Sippee cups with a removable, one-piece white valve are included in this recall."

The 5 models that have been affected include: First Sips Transition cup, Trainer Sippee cup, Sippee cup (including Cute Quips), Sportee bottle, Insulated Swiggle/Sippee tumblers, and the First Sips Transition cup (included in the Closer to Nature Starter Kit.) The affected model numbers (SKU's and UPC's) are included on the Healthy Canadians Website, but it is apparent that this recall affects numerous sippee cups, so you will want to alert your friends and also go through your own cupboards, paying close attention to the hide-away-places that your toddler plunks their drink down during the day when they are hard at play.

How to quickly identify:

According to the Healthy Candians Website, "the plastic drinking cups have spill-proof tops, easy-grip sides with detachable handles and were sold in clear with coloured lids and a variety of colours and character prints. Some of the cups include short phrases on the front of the cups including: "You Pour I'll Fling," or "Drink Drop Repeat." The cups have an approximately 200 to 300 millilitre (7 to 10 ounce) capacity and were sold for children ages 4 to 12 months."

What is the risk?

The one-piece, white valve inside the spill-proof Tommee Tippee Sippee cups can perpetuate mould growth when the valve remains wet/moist and is inefficiently or infrequently cleaned. Mould ingestion may cause gastrointestinal symptoms as well as infections in those with compromised immune systems.

The issue could be an on-going health risk, as the child continues to drink from the cups on a daily basis in many households.