To Swaddle or Not to Swaddle? New Study Raises Concerns 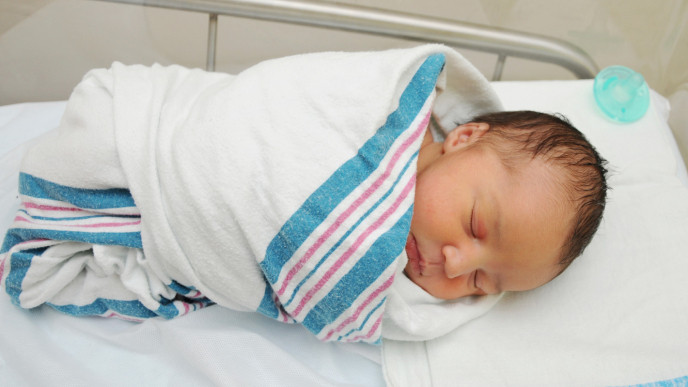 Parents who rely on the (very effective) five S's—swaddle, shush, side/stomach, swing and suck—from renowned paediatrician and baby guru Harvey Karp are facing doubts about their favourite "S" today as a new study released in the the June 2016 issue of Paediatricssuggests that the risk of SIDS is higher when infants are swaddled.

This is understandably terrifying news for any parent to hear—most of us having being told that the swaddle is one of, if not the, most affective ways of soothing a fussy baby. Indeed we are encouraged by midwives, nurses and experts right from birth to swaddle infants tightly and place them on their backs on a safe, firm mattress to go to sleep.

And swaddling works! In fact it was the only thing that worked for my second child, who was never a good sleeper and really only slept when wrapped up as tightly as I could get her and even then I had to keep a hand on her chest at all times. Remove the hand—eyes pop open, cue screaming. Every time.

I'll admit to the icy shiver of panic that jolted through my spine when I read the headline on this one—had I put my babies at greater risk by doing something I thought was benefiting us all?

This is where I ask you not to panic, as I did. A good place to start when decoding the message of this study is with its conclusion:

Current advice to avoid front or side positions for sleep especially applies to infants who are swaddled. Consideration should be given to an age after which swaddling should be discouraged.

So what's up? Is swaddling safe?

Chances are, if you've been encouraged to swaddle, you've also been cautioned to only do so when babies are placed on their backs, in an environment free from blankets, toys and other loose objects that they could potentially get tangled up in. In fact, swaddled or not, this remains the safest way to put your baby to sleep.

If you've ever swaddled an infant, you probably recall around four months of age or so, that moment when you realize your formerly immobile baby can suddenly roll over onto his/her side, or even tummy. This study suggests that once a baby is old enough or strong enough to do so, it's time to give up the swaddle.

This study reports that the risk of SIDS doubled in infants who were swaddled and found on their stomachs after having rolled over from back to front, "... the majority of those found on their stomachs moved into this position after being placed on their sides or backs... Although the numbers were small, the risk of SIDS from swaddling increased with age, with the highest risk associated with infants aged over 6 months."

In other words, older infants were able to flip over while arms remained in their swaddle and couldn't right themselves. In these situations the research indicates an increase in the risk of SIDS related incidents.

It's a scary finding and most certainly not one to take lightly. But doesn't necessarily mean you need to pitch the swaddles—and the peace they can provide both baby and parents—altogether.

Both my children were tightly swaddled as newborns, one preferred an arm out and the other had to have both tucked in tight. Both of them became staunch stomach sleepers as soon as they could flip over, both around four months old.

As soon as we realized they could roll and that they preferred to sleep on their fronts, there wasn't much we could do, but we did stop swaddling. We started using sleep sacks for warmth—still no blankets—and continued to put them to sleep on their backs. But over they would flip, usually before we had even made it out of the room.

As with everything in parenting, you will need to know what works best for your child. Continue to be diligent about all warnings—back to sleep, no stuff in the crib—and now, this research seems to show that no baby over 6-months old should ever be swaddled with their arms in.

Other than that, to swaddle or not to swaddle becomes just one more of the millions of decisions we are forced to make for the safety and health of our kids.

Do you swaddle? Will you still? We'd love to know your thoughts on this one, share in the comments below, or come join the discussion on our Facebook page.