What to eat at this year's CNE 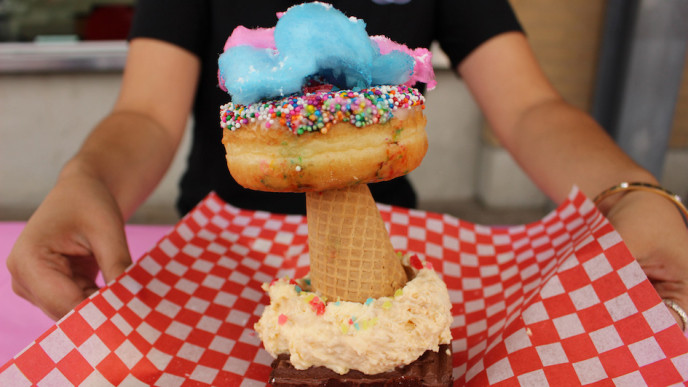 The CNE is back, but it’s not just the rides that have families flocking to this fun fair: it’s the outrageous food you can eat while you’re there.

The 2017 CNE has some foods you’ve probably never heard of, never mind eaten. Curious? Here are some of the most exciting foodie finds:

Coco Concessions is serving deep fried chicken feet on a stick. If this isn’t appealing, foodies recommend trying their Canadian Bacon Pickle Ball, a hot dog in a pickle, wrapped in bacon and deep fried.

Now here’s something I can sink my teeth into: a crape on a stick. But this isn’t just any crepe. Called Dragon’s Breath, the crepe is frozen in liquid nitrogen so it looks like you’re breathing smoke from your nose and mouth when you eat it.

If you’ve never tried a spaghetti donut ball, this is your chance. Fritta has made a ball of spaghetti that’s served with with either cinnamon sugar or tomato sauce and cheese.

Inspired by Canada’s 150th birthday, Bacon Nation has created a bright red burger bun made with Frank’s RedHot sauce. Now this is something I’d try!

I’m getting a sugar rush just from thinking about this confection from Cake Shack. Picture a brownie under a piece of cheesecake topped with a chocolate-dipped sugar cone, a donut, cotton candy and powdered sugar on top of all that.

What are your favourite fair foods? Weigh in! I’d love to hear.