Does your child overeat? 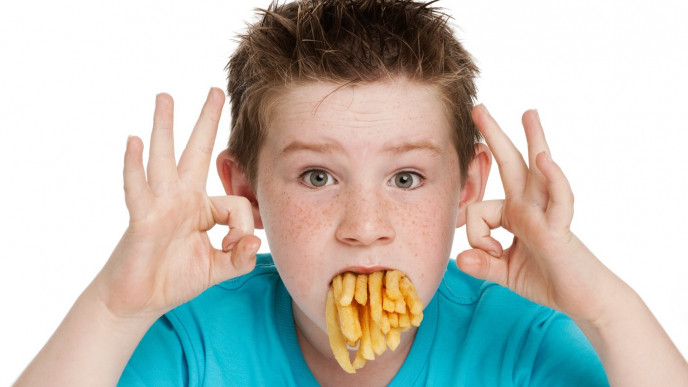 I have two boys and one of them loves to eat. Or overeat, is more like it. If he sees food on his plate, he lowers his head to table-level and shovels it into his little mouth. Even if he's full, he can't resist eating when his brother is eating. If food looks good, or he's afraid there might not be any left later, he eats then, too. The other day on a field trip to learn about maple syrup, I watched him eat a homemade muffin and two gigantic pancakes with maple syrup. He took out his thermos of yogurt and granola.

"Nooooo!" I mouthed, shaking my head when I spotted him from across the room.

He couldn't resist and ate it anyway. A few minutes later, he sidled up to me.

"Mommy, you were right. My tummy hurts."

I had to tell his teacher there was a chance my son might throw up on the bus ride back to school.

I've experimented with various strategies for managing this situation. I've tried counselling him about why it's important to eat slowly, thoughtfully, and only until you're no longer hungry. I've tried coaching him through his meals.

I'm worried he'll make himself sick. That he'll stretch his stomach, leaving room for more food at future meals. I'm afraid he'll gain weight and develop unhealthy eating habits. I'm concerned he'll be in such a rush to eat that he'll make unhealthy choices; that one day I won't be there to say, "Put it down! You're full."

He has a little belly. Kids have already noticed and made comments at school. His confidence has suffered at times, and I work hard to build it back up. I try to keep him active. I model good eating habits. I talk to him about what foods make a balanced meal and how to read nutrition labels. I do my best, but sometimes I feel alone in my struggle. Maybe I'm overthinking things, I'll tell myself. Maybe this will pass and he'll straighten out. It turns out, many of my friends have kids with the same issue; kids who love to overeat. It's hard to stop it without sounding like a nag or making them more insecure. We don't want to scar our kids, but keeping mum is difficult, too.

Over the years, I've developed some strategies to help curb the habits of overeaters:

Make sure there is water on the table;

Cut up a platter of vegetables or start each meal with soup or salad, which is filling and healthy;

Don't stock your pantry with junk; make sure there are healthy options instead for when your kids are famished;

Get active together with a walk or bike ride after dinner to let food settle.