Amazing and Cheap Ways To Play In The Snow 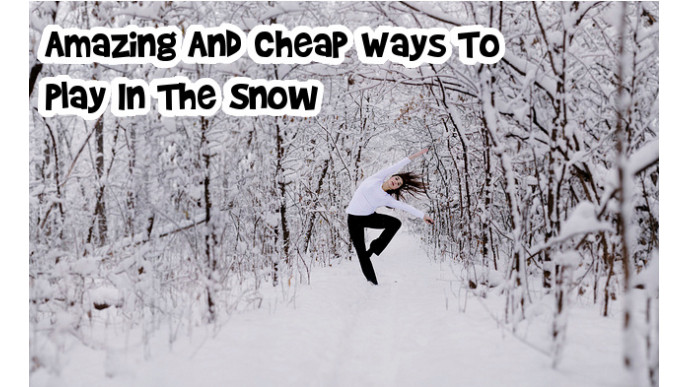 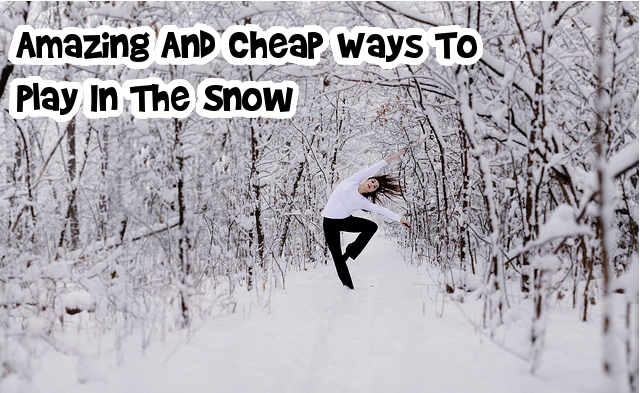 Sometimes the perfect snowy day presents itself and I wish I had invested in more snow sports gear. Snowshoeing is one of those sports for me. I keep meaning to buy a pair because I think it would be a blast. For some reason I keep pushing it back to the bottom of my list of gear to purchase. Check out Backpacking The Rockies for super easy instructions on how to make a basic pair of snowshoes out of branches and twine. While I do not recommend using this gear for long backpacking hikes, these DIY snowshoes would be a lot of fun to create. Even better if you have string on hand you will not have to purchase anything.

No sled? No problem! Duct tape has gotten a face-lift in the past few years and now comes in a whole mix of amazing colours and patterns. Put that coloured duct tape to good use and create your own duct tape sled with this idea from Artzy Creations. All you need is some duct tape and a cardboard box to make creative and custom sleds. Coloured duct tape usually costs about $5 per roll, so I would pick two colours to keep the project inexpensive but fun. I can see this activity kicking the winter boredom to the curb.

Creating a fun play kitchen for the kids outside is super simple. Check out the version over at Sun Hats and Wellie Boots. Simply gather a few kitchen supplies or play kitchen toys then head outside to play. I like how they broke off some icicles to use in the play also. My kiddo is fascinated with icicles and this would give her a safe way to play with them. This might be a little safer than our current plan of standing under the icicles and looking up at their beauty.

While the idea is intended for kids I could see some adults really getting into this idea also. Just mix food coloring into water and ta-dah snow paint. I like how Growing A Jeweled Rose has put the paint in squeezable bottles, but a paint brush and cup or a spray bottle also works just as easily. It could be fun to decorate a snowman with some colour instead of the usual winter hats and gloves. You could also create other snow sculptures and get fancy with the colours. Myself, I would just use the entire backyard as one large snow canvas and make the next Jackson Pollock painting.

My dad and brother love ice cream no matter the season. When the temperatures turned negative my dad always said that it was the best time to eat ice cream because it was not running down your hand melting. Check out this amazing snow ice cream from Gimme Some Oven. You can make some right at home the next time you have a big (fresh!) pile of the fluffy white stuff. This recipe is easily thrown together in five minutes with items many of us already have in the house including sugar, salt, vanilla and milk. Consider it your treat for shoveling the driveway.

I keep trying to make an igloo every year but it never seems to work out quite right. Often I will end up with a little den that I have dug into the snow. A den just does not have the same effect as being able to climb inside an igloo. Check out this awesome igloo on Your Modern Family complete with instructions. They share some great ideas including using a skateboard as support over your doorway to keep the whole structure more secure. If you consider yourself a true artist or engineer, check out this amazing Rainbow Igloo made with juice containers and coloured water. It is a much bigger project but the results are fantastic. As I have personally not been able to make an igloo that is sturdy, I think I will stick to the basic instructions.

This snow maze is exactly how I feel when it is time to take the trash out to the curb after a big snowfall.  Check out the amazing snow maze created by Life With Moore Babies. This massive maze, similar to a corn maze, kept three grown adults busy for over an hour constructing it. No special tools were necessary though a snow shovel is used to make the entrance to the maze. Most of the maze is constructed easily by simply pounding the snow down with your feet. Afterwards the adults let the kids in on the fun to try to find their way through the gigantic maze. Sounds like a fun way to spend the afternoon.

Bargainmoosers what is the most amazing thing you have ever made or used to play in the snow for an afternoon of cheap fun?