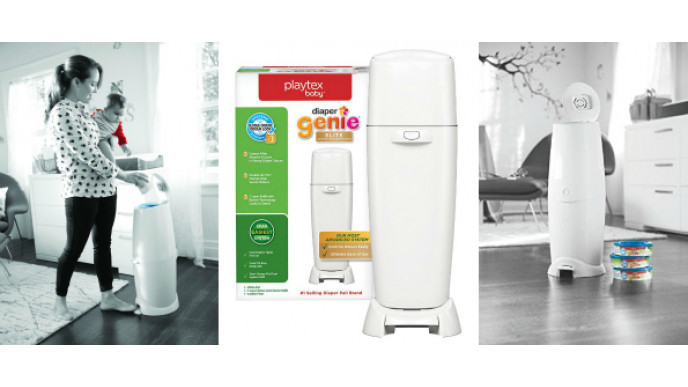 If you have or are about to have a little one and be up to your arms in diapers, check out the Playtex Diaper Genie Elite Diaper Pail System with Front Tilt Pail for Easy Diaper Disposal. Originally $49.99, this diaper pail system is now on sale for $35.97 with free shipping. As an added bonus, you will receive a free $10 Amazon Credit applied to your account when the Diaper Genie ships.

A quick price comparison will show you that the Diaper Genie Elite costs $45.99 @ Toys R Us, $45.99 @ London Drugs, but is on rollback for $35.97 at Walmart. This does not surprise me; Walmart and Amazon often match prices. However, you get a bonus $10 Amazon Credit with your purchase of the Genie at Amazon, whereas you do not at Walmart. You also receive free shipping at Amazon, when you would not at Walmart.

The Diaper Genie Elite is one of the best diaper disposal systems on the market. It has a double-lock diaper pail design to seal in odours and keep germs from spreading. To that end, there is an included activated carbon filter that locks in odour molecules to prevent them from spreading into your house.

This diaper disposal system has a foot pedal and front-tilt empty bin to make it easy for you to dispose of the diapers. Each unscented refill can hold up to 270 newborn diapers. That number gets progressively smaller as the diapers go up in size.

There are over 9000 reviews of this product over on Babies R Us, so it seems to be pretty popular among parents. One parent said:

its an amazing product... our washroom use to smell like diapers all the time... it was getting tough to open garbage can because of strong smell of 3month old.... we are using from 1month now and loving it...NO SMELL AT ALL...only when you remove them

This is the number one diaper disposal management system right now, so you know it has to be good. I am pretty happy about this deal because the diaper genie is on sale AND you get an extra $10 back in Amazon Credit. I think that is a pretty sweet deal when it comes to a system like this. Pick one up for the next baby shower you attend or for your own little one.