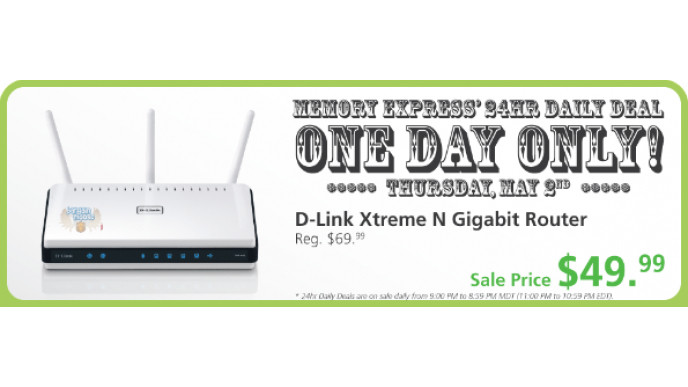 Boost your network speed with this great deal on a D-Link Xtreme N Gigabit Router from Memory Express Canada.

This is a great router. I have a friend who bought it when it first came out and it was hundreds of dollars and this friend knows his stuff. He doesn't just buy any random piece of gear, he analyzes the pros and cons and gets the equipment with the best price-to-quality ratio. He later lost his mind, went all Apple and got their router.

That being said, my friend is a little nuts and in reality most people aren't going to notice the difference between one wireless router compared to another. The routers are also packed with features that you'll likely never use. So what should matter to the average consumer is that this is a good piece of equipment for a good price. One techy thing the average consumer SHOULD be aware of is that this wont necessarily make your Internet faster but rather make your network faster. Noe there are caveats to that statement about perceived Internet speed based on network condition and blah, blah, blah. I'm basically just saying that so we don't get angry emails saying "Shawn said my Internet would be faster if I got this." Do your research, people!