This is the BIGGEST LEGO Jurassic Park Set!

They're taking it back to 1993
By Danielle Doiron, 7 months ago 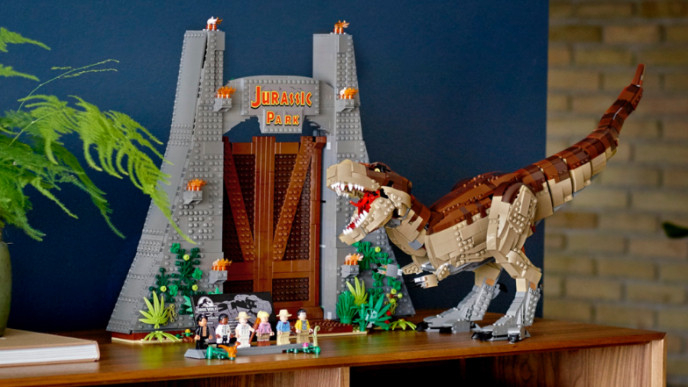 Hold on to your butts, because something BIG is coming to LEGO Canada. In fact, this might be one of their most vicious sets yet. You can now create the largest LEGO T-Rex ever and the iconic Jurassic Park gate all at the same time – because the new LEGO Jurassic Park T-Rex Rampage set is here!

The new LEGO Jurassic Park: T. rex Rampage kit takes a whopping 3,120 pieces to build, and I know a few fans who are already up for the challenge. It's intended for builders aged 16 and up, and this thing is HUGE.

The gates themselves stand at about 42 cm high and 48 cm wide, while the dino measures up at 22 cm tall. You'll definitely need to clear off an entire table to put this one together!

You can even open the trigger-activated gates to keep the T-Rex in or out. And on the inside of those gates, you'll find seven little dioramas from the film, including John Hammond's dining room, Ray Arnold's control room and a bunker for Ian Malcolm. But it gets even better. This set comes with six LEGO MiniFigures of the original characters, like John Hammond, Ray Arnold and Dennis Nedry (who are all new to LEGO).

LEGO will officially release this set out into the world on July 1, 2019 – but you can order one even earlier if you're one of the LEGO VIPs. It's free to join, so why not sign up and score this set before everyone else?

The LEGO Jurassic Park: T. rex Rampage set sells for $299.99 and will ship for free from LEGO Canada. If it ends up being available at other stores, we'll let you know right here – so stay tuned.

LEGO PROMO CODE: Shop now and get a free gift with orders over $35 at LEGO