This exclusive set launches in Canada on Aug. 1
By Danielle Doiron, 2 years ago 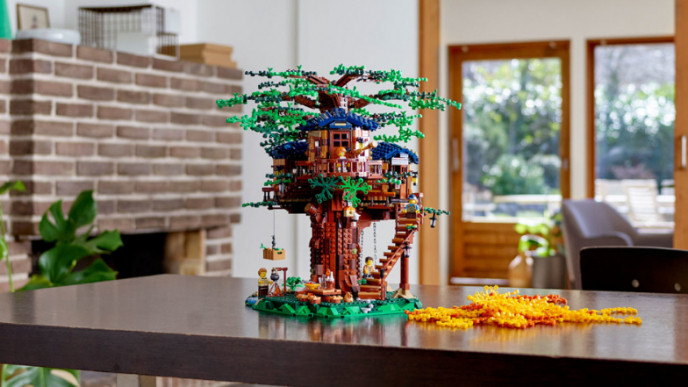 Remember "LEGO House" by Ed Sheeran? I can't exactly tell you why, but it started playing in my head as soon as I saw this. Maybe it's because a completely new LEGO house launches tomorrow!

The LEGO Ideas Tree House is a pretty complex set that's intended for more experienced builders (usually people who are at least 16 years old) – or it's something the entire family can work on as a project. It looks like it's as time-consuming as putting together a real treehouse ... so we'll see who's up to the challenge!

It's part of the LEGO Ideas collection, which means the concept was dreamt up by somebody in the LEGO community. This set, which is no. 21318, has been available to LEGO VIPs for about a week now, but it will officially be available to the public as of Aug. 1 (tomorrow), when it will sell for $269.99.

And let me just say, this thing is MASSIVE. It's really unlike any LEGO set I've seen before and clocks it at a whopping 3,036 pieces, which include four LEGO Minifigures, a landscape base and TONS of tree pieces. There's even interchangeable sets of green, yellow and brown leaves, so you can transition the tree from summer to fall – and then strip them all away for more of a winter look.

You can also make a buildable stream, a swing that hangs from the tree, a bonfire and a ladder that leads to the cabins. And this isn't just a treehouse where you'd go to play for a couple hours. There are full bedrooms in here that are completely furnished with LEGO bunkbeds, a bathtub, a sink and more.

Once the set goes live, it will likely be exclusive to LEGO Canada for a while. It will ship across the country for free, and we'll (of course) let you know if and when it ever goes on sale!