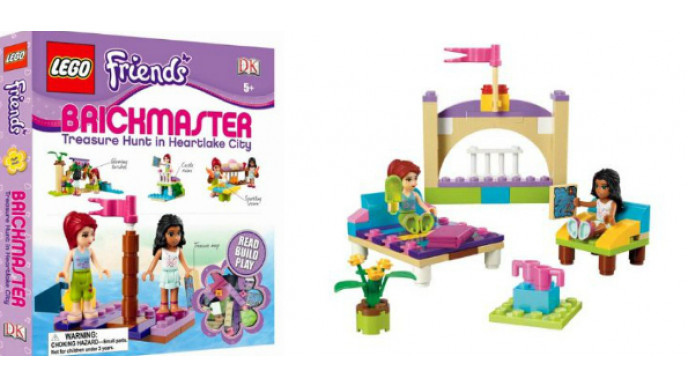 I am always on the lookout for good LEGO deals from anywhere they can be found - even out of country! Book Depository is a fan favourite (and one of my favourite) online book stores. Currently they have this awesome LEGO Friends Brickmaster: Treasure Hunt in Heartlake City on sale from $39.36 down to $18.17 with free shipping. While you probably won't receive it in time for Christmas, this will make a nice belated gift or a birthday gift later in the year.

Let us talk about why this is so cool. First, this is a hardcover LEGO photo scrap book where your child gets to journey with her LEGO Friends and go on adventures. The set includes two LEGO mini figures (one exclusive) and over 100 bricks to build fun things along the way. Of course, these LEGO bricks are compatible with all other bricks and the included mini figure can play with all your other mini figures.

Go on an adventure with LEGO Friends with this Brickmaster set. I love how they have combined LEGO and a story so your child gets more for less. The story will spark their imagination and the LEGO can not only be used within the story, but also after for many other building projects. The included mini figures will journey with your child to all sorts of wonderful imaginary places. The entire set - book and building blocks - is presented in a lovely box design that makes the perfect gift.

I also wanted to mention another set while I am at it. The LEGO Legends of Chima Brickmaster the Quest for Chi is currently on sale from $41.43 down to $25.47. The same set costs $31.33 at Amazon Canada and at Chapters Indigo so you are undercutting that price by almost $6. The LEGO Legends of Chima set comes with two mini figures and a whole bunch of LEGO bricks as well to create 17 figures throughout six stories. Both are great buys and really cool kits.