Where to Buy Hatchimals CollEGGtibles Canada 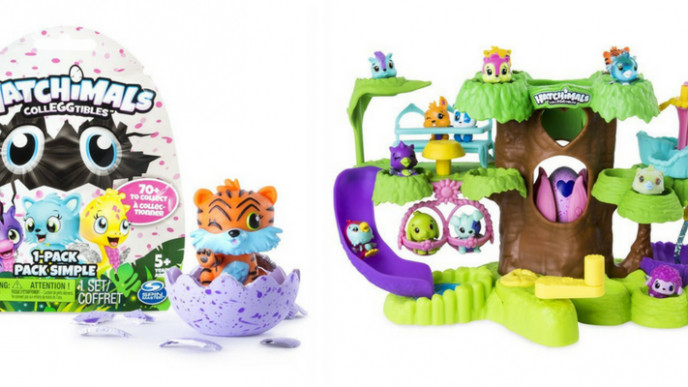 These tiny toys are a huge hit this year, so we put together a list of where to buy Hatchimals CollEGGtibles in Canada – so hopefully you can find some for the best price before Christmas!

These mini Hatchimals are collectible (and much more affordable) versions of the original Hatchimals that are still selling out across Canada. They come in everything from two-packs to cartons full of mini Hatchimal eggs – and you can even find playgrounds and other sets for them!

The Hatchimals CollEGGtibles Glittering Garden 2-Pack will be in stock at Chapters Indigo soon! You can check them out here and add them to your wish list to know as soon as they're in stock!

Here's where to buy them:

And don't forget to pick up The Official CollEGGtor's Guide, too!

The CollEGGtibles are mythical mini creatures with glittery wings that live inside shells decorated with purple hearts. The eggshell is constructed of the same material that housed the original Hatchimals, but these toys are much smaller and WAY more affordable.

How do you hatch Hatchimal CollEGGtbles?

While the original Hatchimals hatched on their own, CollEGGtibles require assistance to hatch. Just rub the purple heart until it changes to pink. Then you can crack open the egg and find out which creature you have scored.

What are the Hatchimal CollEGGtibles names?

There are more than 70 CollEGGtibles to collect or trade. They comes from different family species, like Garden, Farm, Meadow, Jungle, Forest, Ocean, Savannah, Desert, River, as well as the special editions from Lilac Lake, Polar Paradise, Giggle Grove and Cloud Cove.