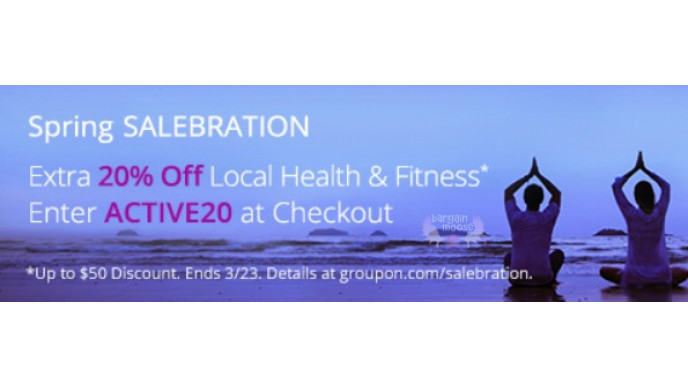 I love when Groupon has coupons because that means you are getting a deal on top of a deal! Right now with promo code, you can get 20% off one local health and fitness deal.

This really is a coupon code I can get behind. I bought a Groupon once for a local boot camp for only $30 for three weeks of boot camp. The Groupon was well worth it as the instructor normally charged $16 a class (less if you signed up longer), and I got my butt kicked. It was the hardest workout I had ever done and within three weeks, I was already noticed a big difference. The instructor was amazing and I loved being there, even though it hurt so badly. When the three weeks was up, I ended up signing up for another few sessions, until he actually had to move his location and it was too far for me to go. In the end, the Groupon worked out for me and him because I would never had tried it at full price, but I did and loved it, which was great for him as he got a new client.

In an alternative situation, I bought a Groupon for a local MMA place and tried it a few times and did not like it at all. I didn't go back, but it only cost me $20 and I wasn't locked in. I think buying Groupons for local fitness facilities is truly a win-win.

In looking at what is available in my city, it isn't really just traditional fitness deals. They have karate, acupuncture, allergy testing, supplements and so much more.

Remember, you only have until tomorrow to use this Groupon coupon code.