He's working on his roar
By Danielle Doiron, 3 years ago 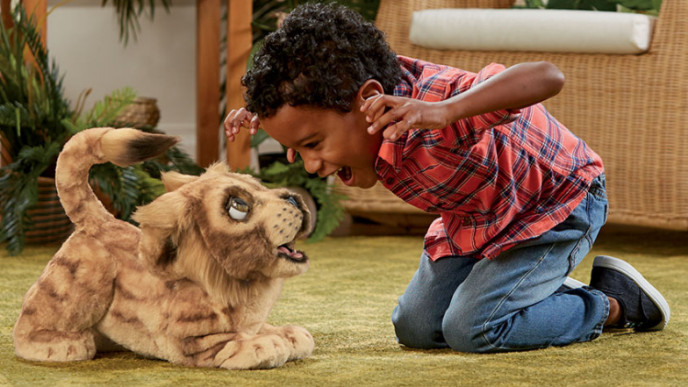 If you're counting down the days to when the live-action Lion King comes out, you're not alone. The Canadian release date is July 19, 2019 – and that's just over a month away.

But in the meantime, FurReal just came out with a new toy that's brushing up on looking down and working on his roar. The Mighty Roar Simba is finally available in Canada, and you can pick one up at Walmart!

I have to say, out of all the FurReal toys we've seen over the years, this one might be my favourite. It helps that The Lion King is one of my all-time favourite Disney movies, and animals don't get much cuter than Simba.

The FurReal Mighty Roar Simba is an interactive little lion that wants to roar, talk and play. He responds to touch and sound with more than 100 different reactions. He can move his head, eyes, ears, mouth and tail – and he's full of surprises. He might even want to get into a contest to see who can roar the loudest!

Like other FurReal toys, this Simba comes with a treat you can "feed" him. In this case, it's grub on a stick – and Simba will even respond when you give it to him. He will also need to "eat" four C batteries to get going.

He's in stock at Walmart for $129.97 shipped, or you can place a $129.99 pre-order for one at Toys R Us. And if you're looking for other FurReal Friends, Chapters has Chatty Charlie for half-price!