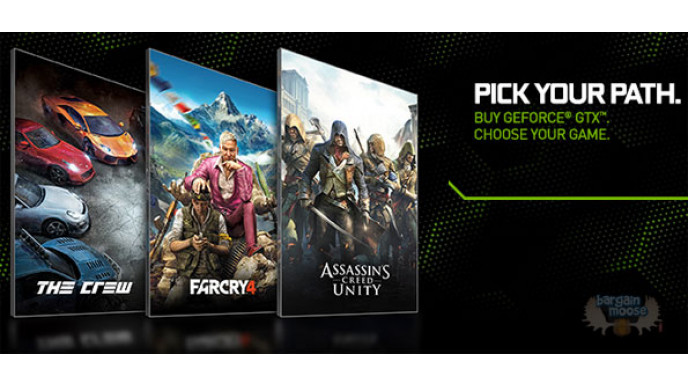 Whether you're planning on building your own computer, know someone who is or are maybe even looking to buy a notebook, then there's a chance that you could also get one of the following Ubisoft game for absolutely free: The Crew, Far Cry 4 or Assassin's Creed Unity.

What makes this freebie even more incredible is that none of these Ubisoft games have even been released yet, which means that you will be getting a newly released game for free and will avoid paying the usual $69.99 price tag! They're scheduled to be released on the following dates:

Although this GeForce freebie is only valid on the following select graphic cards and notebooks, it's still a really awesome one to take advantage of:

The complete list of retailers from which you can get these is available on GeForce's site, but here are a couple of the major ones:

Each retailer also has a dedicated page from which you can easily browse the products eligible for the freebie but keep in mind that a couple of these will ship from the US and may incur higher shipping fees than their Canadian counterparts. For instance, although we frequently post and blog about Newegg.ca, this promotion only applies to Newegg.com, which may involve a higher shipping rate along with the possibility of duties and custom fees.

As such, I suggest that you price compare among the different sites to see which one would yield the lowest shipping rate. To avoid yourself the headache, first head over to either Canada Computers, Memory Express or NCIX as all three of these ship from Canada.

Once your purchase is complete, you can redeem the special GeForce coupon code that you will receive on their redemption page, which will then allow you to choose your free game.