You'll want on too!
By nadacolada, 2 years ago 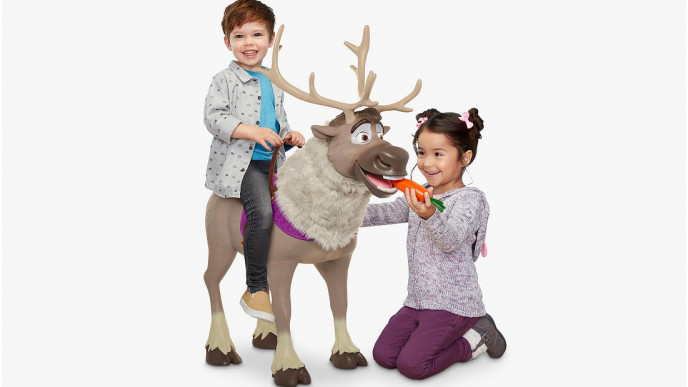 Are you excited about the release of the new Disney Frozen 2 movie? It's not long until it's out, and you know the kids will go daft for all things Frozen afterwards. Be prepared, and get a Disney Frozen 2 Feature Sven toy from Toys R Us. It's priced at $149.99, which isn't bad when you see the size of it.

The Disney Frozen 2 Feature Sven is a giant toy version of that adorable reindeer from the Frozen movies. When I say giant, this ain't no handheld toy - it's big enough for your kid to ride on.

Standing at 3 feet tall, it's easy to see why it's nearly $150. It's suitable for children aged three years old and can accommodate children up to 70lbs in weight.

Use the carrot he comes with to feed him and he'll make chomping noises. In addition to that, he will make over 20 different feature sounds, including galloping "clip-clops" when you pat his head or pull on the reins.

This isn't a giant plush toy - Sven is so much more than that, but he does have a furry mane to snuggle into.

When Is Frozen 2 Out In Canada?

The new Disney Frozen 2 movie will be released in Canada on November 21, or in some provinces November 22 2019.