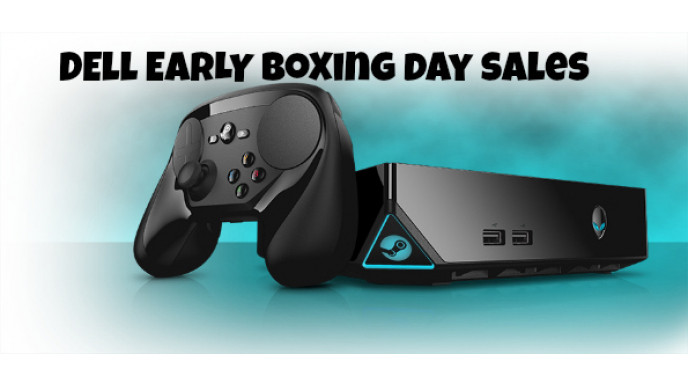 Dell Canada's Boxing Day sale started today and deals run through the 27th of December 2015. There will be special door buster deals released on December 26th @ 6AM EST and 12 PM EST. You will get to save on televisions, headsets, laptops, desktops, and more with free shipping on your entire order. Are you spending over $99? Get 5% back on a Dell Advantage Card - see the website for details.

The early-bird electronics are already sold out - so you will have to wait until boxing day for the extra releases: twice that day. However, there are some great computer deals that you will not want to miss out on.

The best gaming deal has to be on this New Alienware 13laptop that comes fully loaded! Enjoy the 6th Generation Intel i7 Processor, 12GB of memory, 1 TB hard drive, and the gorgeous NVIDIA GeForce GTX 960M with 2GB GDDR5 graphics card. Originally $1749.99, this gaming laptop is now on sale for $1,549.99.

The Alienware Steam Machine is a computer of a different sort. It has one side devoted to Steam - like a console - and the other side works like a regular computer with Windows. Originally $699.99, get this machine for $649.99.

This is one huge computer for a fantastic price. I am not sure what you would do with over 2TB of space, but I am sure you would put it to good use.

As I mentioned before, keep your eyes open for the door buster deals being released at two different times right on Boxing Day - December 26th - itself.