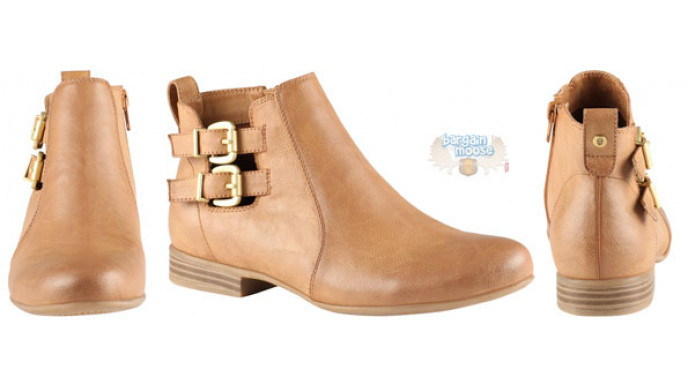 For a limited time, Call It Spring is offering half off the original price on all merchandise that is already on sale! There are plenty more great deals, but the Limato booties are the ones that particularly caught my attention because they were originally priced at $65, but are now down by 70% to just $19.98.

Call me crazy but I love wearing boots in the spring and summer with a pair of shorts. I don't mean knee-high boots, but rather booties or something along the lines of the Banne motorcycle boots, which are currently on sale for $39.98 (reg. $80). Speaking of which, these are actually pretty cool as well, especially if you wear them with a floral dress, as per Call It Spring's suggestion.

To get back on track though, the Limato booties have a leather appearance and a wood-like block heel. What I like about them the most are the two golden buckles on the sides, especially since they could easily be worn with a pair of skinny jeans for a cool evening look.

But since it is summer and paying full price for a pair of sandals is never worth it, in my opinion, I also found these Vitereta sandals on sale for just $15 instead of $30. They feature a regular sole with straps in either a bone (beige), light blue or black colour. I much prefer the bone one as it's a more universal colour that can be worn with just about anything, but the light blue would definitely be my next pick. There is also a great deal on the Jackett men's sandals, which are now down to just $17.50 (reg. $35) and come in either a taupe or navy colour. They would be perfect for a day spent barbecuing or even lounging by the pool.

Shipping is free on all orders over $50.