Helping you save $$$ wherever you can
By Danielle Doiron, 6 months ago 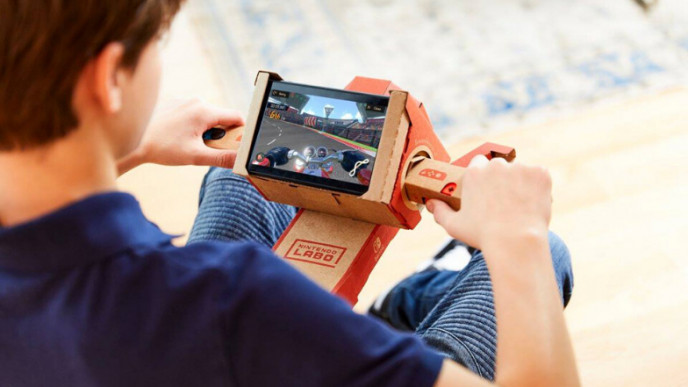 The Nintendo Switch could just be the most popular console out there right now, and it's the one that's completely taken over my home. I can't remember the last time I saw my husband go a day without playing something on it or using his Switch to watch YouTube videos and seek out new games.

Honestly, it looks so cool that I'm almost tempted to pick up my own! And if one is on your Christmas shopping list this year, chances are you've been scouring the internet to try and find the best Black Friday deals on Nintendo Switch consoles and games. To help you out, we put together this quick guide, so keep on reading to find the lowest prices, discounts on specific games and everything else you might need to know.

How much is the Nintendo Switch in Canada?

Okay, raise your hand if this is a question you type into Google at least once a week! I know that's a pretty common practice around my house, especially since the answer tends to fluctuate every so often. The Nintendo Switch has an MSRP of $399.99 in Canada, and it's rare to see the price really stray from that.

To be completely candid, if you're looking for an amazing Black Friday offer on the original Nintendo Switch console, you probably won't find one. Forbes even released this warning about the deals Nintendo announced this month. The lowest price we found this year is at Amazon Canada, where the console is $393.97.

Now, as you might remember, that's not the only Switch in town! Nintendo also added something new to their console family, and it's called the Nintendo Switch Lite. It has a Canadian MSRP of $299.99, and this little gadget is designed specifically for handheld play. That means it's a bit more compact and lightweight than the original model, and it doesn't have the original's TV mode and tabletop mode capabilities.

Amazingly, a few stores across Canada have it for cheaper than the recommended price, and the absolute lowest one we found (by a few cents) is online at Walmart. It's part of their annual Toy & Video Game Event, which is honestly one of the highlights of my Black Friday shopping experience. And yes, it will ship for free.

But now, I think it's time to talk about some real deals. I mean, you need things to play once you have a console, and as we all know, most video games (especially the AAA ones) don't exactly come cheap. And don't even get me started on what it can cost to actually play said games online with other people.

In a nutshell, you do that through Nintendo Switch Online. This paid membership service lets you "battle it out or cooperate with players online" when you play some of the most popular Switch games, like Splatoon 2, Mario Kart 8 Deluxe, Super Smash Bros. Ultimate and (my personal favourite) Mario Tennis Aces.

New members can qualify for a FREE seven-day trial, but otherwise, you'll need to purchase a plan to take part in the fun. The service has been in Canada for a while now, so chances are many of you have already claimed and used that freebie. Nintendo has a few pricing options, or you can purchase membership cards from other retailers, in the same way you probably did with XBOX Live cards back in the day.

A 12-month individual membership direct from Nintendo Canada (and most of the stores across the country) will ring in at $24.99 – but Costco has a 12-Month Individual Membership for $23.99! You can also purchase a digital 12-Month Family Membership for up to eight Nintendo account holders for $43.99 instead of $44.99. And if you're buying at least one of these every year, those dollars off will definitely start to add up.

Which Nintendo Switch games are on sale?

You might see different Switch games on sale all over the place, but some of the absolute lowest prices this Black Friday weekend are happening at Amazon, Best Buy, The Source and Toys R Us. If you act fast (before everything is sold out), you should be able to claim a few of them, and taking a peek is absolutely worth your while. Who knows? You just might find something that's on your kiddo's Christmas list – or your own!

If you know of any lower prices for these games or found deals that we forgot to include on this list, let us know over on your Facebook page or in the comments here! And we'll keep an eye out for more Nintendo Switch discounts come Cyber Monday, so stay tuned if there's something you hope to see marked down.