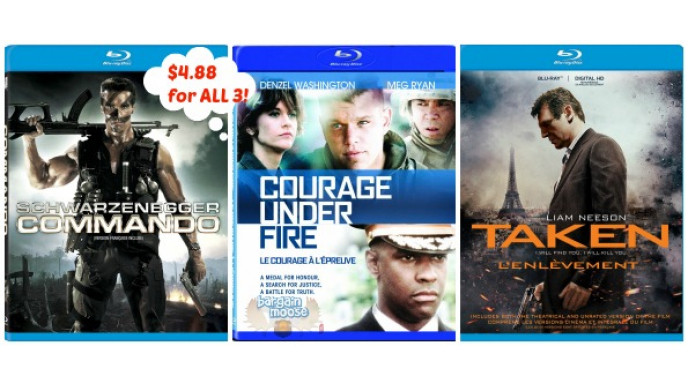 Are you looking to flesh out your movie collection while sticking to a budget? Check out the latest Blu Ray discounts where a single movie in Blu Ray format will cost you only $5 or less. On top of that, most (but not all) of these titles qualify for the $10 off three Blu-Rays or more deal so you will pay just $4.88 for three!

I looked up this section of under $5 Blu-ray movies again because there was recently two price drops on movies that moved them into this category. Taken, with Liam Neeson, dropped in price from $21.99 down to $4.88. I am actually surprised to see such a popular movie included in this section. Taken was a good movie according to me and other Amazon reviewers:

I was on the edge of my seat during most of this picture. It was VERY good. Of course, Liam Neeson is, perhaps, the biggest reason for this picture being so good. He is so convincing. I am looking forward to seeing "Taken 2". I can only hope that it is as enjoyable as the first "Taken" is. You won't be sorry buying this movie.

This is a good one to have in your collection, especially for this price. Pair the above movie up with two of any of the five following movies to receive three Blu-ray movies for only $4.88.

Each of these movies is only $5 right now. Add two of them to your cart with Taken and $10 will come off your order, essentially making those two movies free. That means you will get three Blu-Ray movies for only $4.88 - the price you pay for Taken. If you divide that price by movie, you are paying just $1.63 per Blu-Ray film. You cannot do better than that. I could trade them in at my local used DVD store for more than that in credit!

This is an incredible deal for three movies, even if they are a bit older. I chose Commando as it has Arnold Schwarzenegger in the movie. He can be quite entertaining. I also chose Courage under Fire as that movie is pretty darn famous. Denzel Washington and Meg Ryan lead a fantastic cast. I miss seeing Meg Ryan in movies; she was one of the actors I liked best.