Plenty of changes are coming to the iconic Tim Hortons contest
By Danielle Doiron, 2 years ago 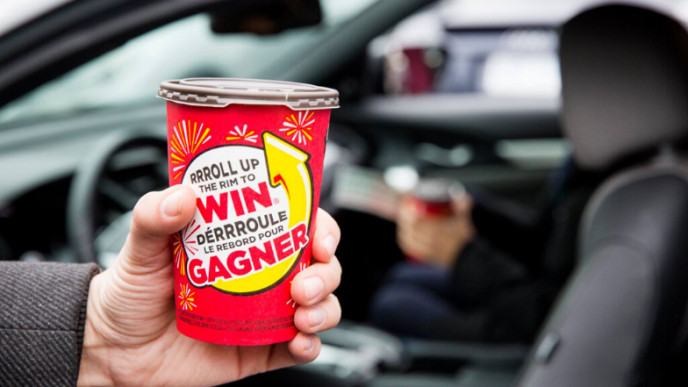 We're a couple months into the new year. Spring break is on its way, the snow is finally melting, and arguably Canada's most notorious contest is back for another year. People flock to Tim Hortons restaurants every spring for their chance to roll up the rim and win prizes like free doughnuts, Timmies gift cars or a new car.

This year's contest is almost back, but Tim Hortons just announced plans to do things differently. These are some fairly drastic changes, so you might want to familiarize yourself with them before things start up.

As a CBC reporter writes "Until now, Tim Hortons' annual Roll Up the Rim contest encouraged customers to consume and throw out millions of disposable coffee cups for a chance to win prizes. But this year it's rolling out a greener version of the contest." It's a move many people say is long overdue.

How the new Roll Up the Rim contest works

For the first time ever, you can either roll up a physical rim on one of their disposable cups or participate via digital rolls. It's all a little complicated, but you'll want to make sure you download the Tim Hortons app via the App Store or through Google Play before things kick off. You might also want to be a Tims Rewards member.

Registered members who order a hot beverage during the contest and scan their card or app will receive a digital roll either in the app or online. That means during the first two weeks of the contest, they'll actually score TWO rolls – since one is on their cup. If you haven't registered your card yet, the rolls will accumulate on your account to be accessed when you do set everything up – so no worries if you're late to that party.

But here's where things really get sustainable. If you bring in a reusable cup or mug, you'll get THREE digital rolls – and that applies to purchases during the entire contest. That could mean 15 rolls in a work week!

Tim Hortons also retired their "Please Play Again" results, and thank god. Now, there's slightly less disappointment when you don't win a prize, because you'll be entered into one of four draws for $100,000. The full details for how to enter are available online, so I'd suggest checking those out sometime soon.

When does Roll Up the Rim start?

Tim Hortons also shortened the contest, which usually runs for up to two full months. This year, Roll Up the Rim will take place from March 11 to April 7 – just four weeks. Physical contest cups will be available for the first two weeks of the contest, and you can roll up virtual rims throughout the entire four-week duration.

I'm sure just about everybody owns at least one reusable travel mug by now, but just in case you don't, Timmies has a way to help out. On March 10, they day before the contest officially begins, they're giving away 1.8 million reusable cups for FREE! They're only available while supplies last, so make sure you get there early!