Have You Seen These Abusive Balloons!? 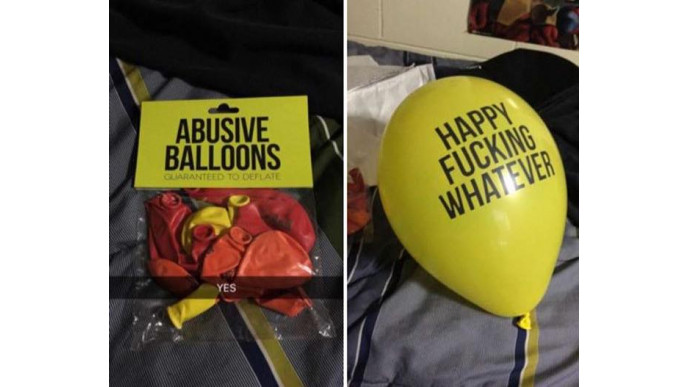 You have probably seen these abusive balloons while scrolling through your Facebook news feed. There is no doubt about it - they are a combination of hilarious and offensive. Would you buy something like this as a gag gift? If you were thinking of buying them as a joke, you will notice that they are hard to find in Canada. I found them in a UK Etsy shop with reasonable prices and shipping rate. You can have a pack of your own abusive balloons for as little as $12.71 CAD. Shipping varies.

Of course, some of these balloons have language that is too colourful to type here. By browsing through the Etsy shop you can understand what I am saying. Some of them are pretty hilarious though. I think I would buy the "Old Cow" as a joke for my grandmother for sure. That is her type of humour too. Speaking of humour, I would make sure the gift recipient has a good sense of humour before you hand them a some of these balloons blown up.

Shipping rates will vary a little bit. For the most part, within Canada it looks like the shipping costs are just over $6. Most of the balloons are $12.71 for a pack of thirteen depressing party balloons. The balloons are only available in black with white writing, but I still think their message is pretty clear.

Moosers, what do you think of these balloons?