How to Make Your Own Moon Sand

A fun activity for rainy days!
By nadacolada, 1 year ago 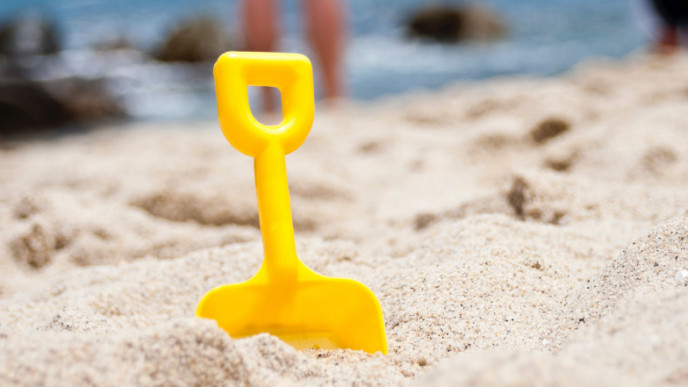 There's no way you can escape moon sand right now. It's also called kinetic sand or sometimes cloud dough or moon dough. The kids want to make stuff, and this won't make you add inches to your waistline. Sure, it's the stuff of nightmares for us parents, along with Play-Doh and slime, but the kids sure love it.

How To Make Moon Sand

As for the oil, you can get away with using different varieties (according to the internet, at least), but we used baby oil. It might be a little more expensive than, say, canola oil or olive oil, but it did yield pretty great results – and if you have young children, it's probably something you have on hand anyway. You can also use coconut oil, which makes softer dough and is edible, in case your kiddos eat some by accident. Follow these steps:

That's pretty much it! You can experiment with different colours (based on whatever food colouring you might have on hand), and you could also add sparkles, glitter or little beads to the mix. It may still look a little more like flour than the kinetic sand you can buy in stores, but it should work just the same.

How do you store DIY moon sand?

Store your moon sand in an airtight container. A mason jar or something similar with a seal should work really well. It shouldn't dry out as long as you store the sand properly and make sure it isn't exposed to chemicals, extreme heat or any other things that could ruin its composition.

Does moon sand dry out?

Honestly, it shouldn't dry out. Unlike Play-Doh and other compounds, it shouldn't stick everywhere, which actually makes cleanup pretty easy. While it likely won't dry out to the point where it's unusable, just beware that this stuff is flaky – and you'll probably end up with little pieces all over your table.

How does it compare to store-bought kinetic sand?

It pretty much costs next to nothing to make, and chances are you have all the ingredients already in your house. Just compare that to a standard bag of sand (which would usually cost you about $10).

Now, you can occasionally find a bargain on the store-bought stuff, so I'd check out retailers like Chapters, Amazon*, Walmart and Toys R Us if you're hoping to score a deal. Also, don't forget that you might want sand toys or Play-Doh accessories once you actually have the moon sand purchased or ready!