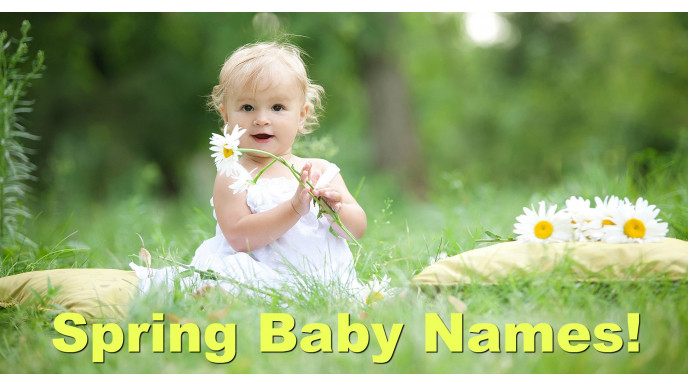 Naming babies. Not easy is it? I know there are a million books and lists available, but when you're expecting a baby it is still one of the hardest decisions you'll need to make.

While pregnant with both of my daughters I read all the lists and I wrote lists of my own. And then, with both of them, THE name presented itself in the strangest of ways. But once I heard it I just knew. That was it. Convincing my husband was a different story. In fact with our second we did not agree on a name until she was literally being born. Literally. Being. Born.

We are not going to be naming anymore babies in my household, but you know what? I still love reading the top baby name lists every year. Now I read them to see if my daughters' names are on them up. I always wanted original names for my girls, which I'm happy to report that so far at least, they still have.

Spring is the season of renewal and rebirth—a perfect influencer for baby names! If you've got a baby on the way soon, or anytime for that matter, here are 20 baby names inspired by spring:

Flower—this one is obvious but it doesn't get much springier than this!
Petal—a pretty variation on Flower, Petal is also more common choice today
Brooke—a lovely, vibrant name that makes one think of spring rivers bubbling to life after a long winter, Brooks is the boy's alternative, also great!
Primrose—here's one that's still a bit unusual, though increasing in popularity after a popular character from the Hunger Games series
Blossom—the literal meaning is fresh, its a perfect spring choice
Sunny—happy, warm and welcoming, just like spring itself
April/May/June—it's no surprise that all the months that make up springtime are popular names, these days April seems to be the most oft used choice of the three
Lily—Lily is a beautiful floral choice today, that harkens of Easter lilies, civility and tradition
Meadow—this one was on my girls list and though it didn't make the cut I still adore it
Willow—as graceful and beautiful as the tree itself

Buddy—Jamie Oliver's son Buddy Bear is an adorable pairing of this spring-inspired moniker
Cruz—an ultra cool name that's in fact deeply rooted in religion and perfect for an Easter name; its literal meaning is cross
Leif—this is a Scandinavian name pronounced Layf, which in North America shares a aural connection to Leaf, but you can of course use the literal spelling Leaf as well
River—this is strong nature-inspired name similar to Brooke that could easily be used for either gender
Reed—though traditionally a boy's name, one of my daughters has it for her middle, its family inspired not spring-inspired in her case
Storm—a good spring storm is exciting and fierce and this is a name is full of energy, a bold choice that could actually work well for either gender
Noah—obviously biblical, but also connected to spring by its ties to water, flooding and animals
Fox—maybe my favourite of the list, Fox is short, sweet and stylish
Pax—a little bit like Fox in terms of phonetics, and launched into super fame when Angelina Jolie and Brad Pitt chose it for their son. The literal meaning is peace, which for us in Canada anyway, is what spring brings after a long winter
Sparrow—Nicole Richie and Joel Madden chose this name for their now 6-year-old son, launching it into popularity for a time. This one was on my own boys-name list for a while. I had a girl!

We want to hear your favourite baby names. Do you have a spring-inspired little one at home?

AMAZON CANADA PROMO CODE: Back to School: Use this Amazon Canada promo code and save 10% off textbook orders over $100