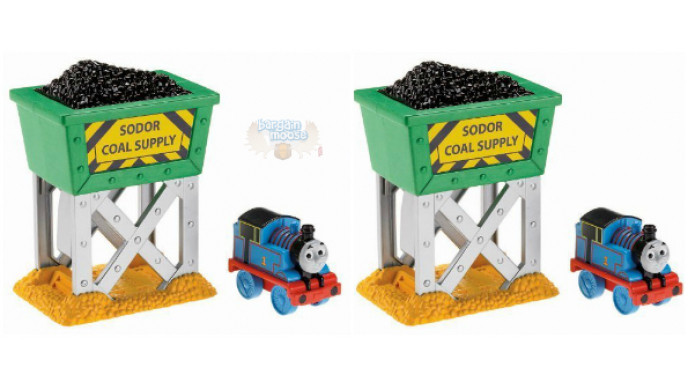 Thomas & Friends is really popular among young kids these days, so much so that I have heard parents saying it is the only thing that their child will play with. Walmart Canada has discounted this Thomas & Friends Coal Hopper Launcher complete with Thomas Engine from $16.67 down to $10 with free shipping.

Price comparing was not exactly easy, as Toys R Us does not sell this toy and the re-sellers on Amazon are insane as they are asking over $40 including shipping. However, I did find the same toy at Sears Canada for $16.99 plus a minimum $4.95 shipping or handling depending on whether you get the toy shipped to you or to your local store. As Walmart offers free shipping and has such a good deal on the set, I doubt you will find it cheaper anywhere else.

If you are looking for other Thomas themed toys on clearance, there are a few! The Thomas & Friends - Action Trackswas $24.97 and is now $15. Action tracks are like an obstacle course for Thomas where you have to hit certain buttons and leavers to keep Thomas on his way.

My First Thomas & Friends Surprise Delivery Thomas is an interactive larger Thomas train where you help Thomas deliver ice cream, fireworks, and more. Originally $29.94, this Thomas is on sale for $20.

Lastly, the Thomas and Friends Twist N Tumble Cargo set looks wicked awesome. Unlike the previous sets, this one comes with a Dart Die-Cast Engine, Cargo Car, and Iron Cargo. It can also be connected with other play sets. Originally $39.97, the tumble cargo set is on sale for $30.

Thomas was on television when I was young, so I find it amazing that the little engine and all his friends has remained relevant to kids so many years later. I guess trains are just that cool.