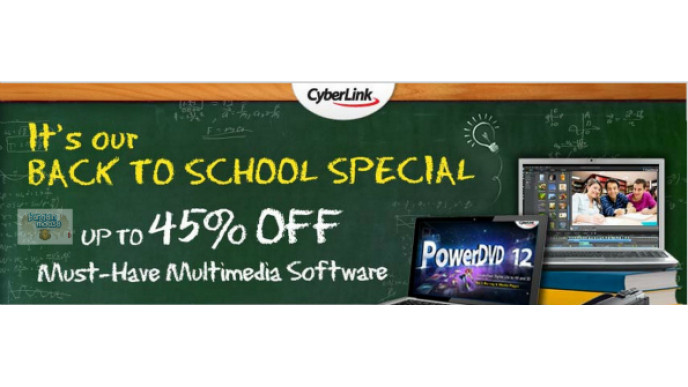 On top of the deep discounts that CyberLink is offering for its back to school deals, they are bundling a bunch of free software. If you need some media software but don't want to shell out some major cash, these are the folks to go to.

Here are the deals. Some of them come with free bonus software but I'm only going to include the main software here. I'll include the bonuses later.

I like CyberLink's business strategy. They know people either don't want to or can't shell out hundreds of dollars for expensive Multimedia software such as Photoshop or Premiere. Now admittedly the software isn't going to be as good as the higher end packages but we don't all need that.

They are offering these sales under a back-to-school deal which, at first, I thought was odd. Seriously? Back-to-school? Like you need video editing software to go to college! But then it hit me. Well, two things hit me. First, how many people in high school and college think like me? I think a lot. Having a nicely edited photo or video component to a report or presentation can't hurt you. The other thing I realized is that the level of talent has gone way up. When I was in school, video editing took skills. It still does, of course, but it seems like many more people are doing it.

In any event, these deals are awesome. Pick em up, impress the teacher.