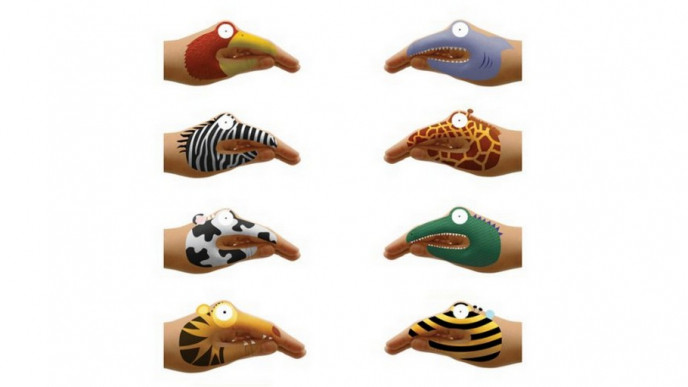 When my kids were younger, sometimes when we ran errands I would draw different faces on their fingers with a ballpoint pen and it kept them wildly entertained. It amused the people around us too!

Here's a cool way to do something even better than that with your kids and in full colour glory too! Check out these Temporary Tattoos for Talking Hands being sold by Amazon.ca Marketplace Seller fuze Canada. The shapes of the animals fit neatly onto a hand so you can move the mouth around like a true hand puppet! This is selling for $10.45 plus $5.54 shipping (total of $15.99, or, $2 each.) It will take several weeks for this item to arrive. My order states it will arrive sometime between Sept. 29th - Oct. 13th. Hmm... Maybe they can be used as part of a Halloween Costume. Zookeeper, anyone?

Because there's 8 cute animal tattoos in the box, you'll have enough for entertaining your kids while running more than just a few errands.

You know what else these animal temporary tattoos would be good for? When the kids are sitting in the car on holidays, but holidays of course, are long gone now. (Note to future self.)

The artwork design behind these animals is bold, bright and fun. There's a bird, zebra, cow, lion, shark, lizard, giraffe and bumble bee.

You can easily make the lizard into a dragon, crocodile or alligator with your imagination. I was going to tell you the bumble bee was a tiger until I took a closer look. Animal and insect combined in one!

I checked out the reviews that are mostly really good! Some buyers had issues with fit (on a child's small hand for example) so I would make sure to really trim it up beforehand. A bee with 4 stripes looks just as good as one with 5, really. It's just a little haircut!

Shipping is $5.54 and will take several weeks.