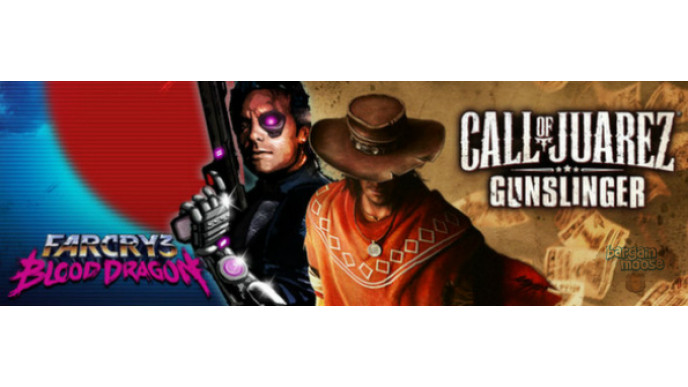 Get two awesome games for less than $15 from Steam!

I haven't played either of these games, but I've heard great things about the Call of Juarez series. Actually, I heard the third installment, the one before Gunslinger, was pretty bad. Thankfuly this time they've gone back to the old west. I guess the previous one, The Cartel, was western themed, but in modern times. Anywho, we're back to the old west and I'm cool with that.

Now, for Far Cry 3: Blood Dragon, I'll use the same quote as I used in a previous article. It's from the Book of Knowledge, Wikipedia:

Far Cry 3: Blood Dragon is set in a dystopian 2007. Players control a ‘Mark IV Cyber Commando’ named Sergeant Rex Power Colt. Ubisoft describes the game as “an 80s VHS vision of the future” where the player must “get the girl, kill the bad guys, and save the world”. The game’s villain is Colonel Sloan, who commands the Omega Force, a cyborg army.

These are digital download PC games, so no shipping.