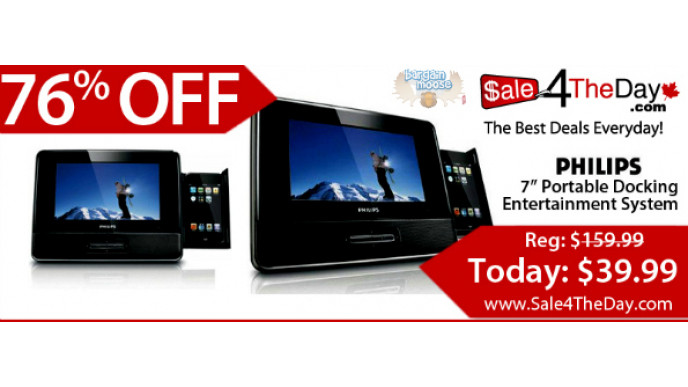 Sale4TheDay has some more great tech deals today. This time it's for the iPhone and iPod touch users among the Moosers.

I actually own one of these. I don't own an iPod touch anymore but I still have this. It's a great little unit (especially at this price) that has a lot of uses. I primarily used it at work to entertain myself during the slow times and on breaks and lunches. It has a place to dock an iPhone or iPod touch but it also has a place for an SD card if you happen to not have an iPhone or iPod touch. Obviously the main use is for video. The 7" screen, to be fully honest, is not the best. This is actually an older unit that has been refurbished. That's not to say that it's terrible, just don't expect it to have the same quality as your brand new, $3500 60" LED TV.

Secondarily, is the sound aspect of it. It actually has a decent set of speakers in it and it comes with a remote so you can set it up somewhere like in a camp or even just in the kitchen to listen to some music. This would be the perfect unit to keep the kids entertained on long car rides. It's super cheap so if your kid happens to throw a fist full of pudding at it or gets a foot into the screen, it's not the end of the world. It's not like the flip down screens that are built into some cars and cost hundred to replace. At this price you could even pick up a couple, one for each seat if you have two kids or to have one as a backup.