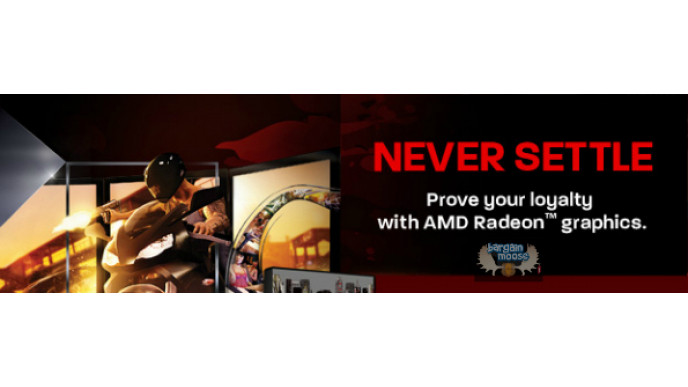 These are links to searches for the video cards that come with the free games:

This is a hard deal to link to since AMD doesn't make their own Radeon cards anymore. They just license it out to other companies. That means that, for example, the Radeon 7870 that is made by XFX and the one made by Gigabyte both have this deal. Please make sure the video card you select has the deal as it is possible that not every manufacturer has it.

The first game is, for most, not super exciting. It's McRae Dirt Showdown. Essentially it's a rally racing game that is endorsed by Colin McRae or, to be more accurate, his estate, as he passed away a few years back. The game didn't get super ratings but has a respectable mid-70s range. It seems that unless a racing game can live up to certain expectations set by a select few series, they don't get great ratings. Nevertheless, I often find that even a mediocre racing game, as this one seems to be, proves to be a lot of fun. Plus, you're getting this game for free so you have nothing to lose.

The second game, and one that more gamers will be in to, I think, is Sleeping Dogs. Sleeping Dogs is an open world, free running game that is set in an alternate world Hong Kong. You're a police officer sent in to infiltrate a Triad. I'm very much into the sandbox style games where you are just set in a world and you can run all over doing whatever you want. That's why when I list my favorite video games it is full of series like InFamous, Katamari Damacy and Assassins creed.

I'm not a PC gamer so this specific deal isn't going to work for me. I have a decent backlog of PS3 games I want to get through, but once that is done (and, hopefully, the game has come down in price) I'll be picking it up. It has a rating in the 80's on Metacritic and a it seems that a lot of people I know dig it.