These bath bombs truly live up to their names
By Danielle Doiron, 1 year ago 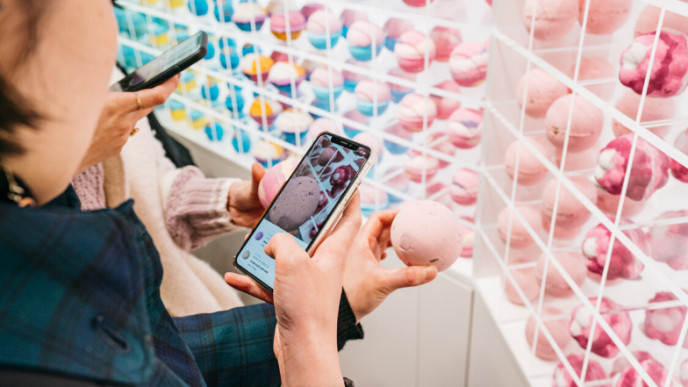 Practically every season, LUSH releases new products that blow any competition out of the bathwater. Their name alone is enough to conjure up daydreams about bath bombs, fair-trade lotions and those shampoo bars that everybody on YouTube seems to have tried by now. But recently, they took things to an entirely new level.

One of their latest creations, the Amazeballs, are no ordinary bath bombs. They have the same outer coating or shell as their traditional staples, but these little things are FULL of surprises. Every LUSH Amazeball is packed with fizzy flakes and bubble bar foam. You can dump out the contents and save the rest for a second bath or drop the entire thing into your tub all at once for an out-of-this-world kind of luxury.

Fittingly, one of them is called the Fly Me to the Moon Amazeball, and it's shaped like a teeny UFO. It sells for $8.95 online, as do the other three Amazeballs that are currently available in Canada.

The others are holiday-themed, as you can tell immediately from their names. Everybody's favourite scent was transformed into the Snow Fairy Amazeball, and you can test the waters with this Holly Golightly Amazeball. But if you want what (in my opinion) sounds like the most grownup and extravagant one of all, you have to check out their Don't Let the Bells End Amazeball. Whichever you buy, know that shipping rates vary, and ground delivery is usually the most affordable option. Just order by Dec. 16 if you want these for Christmas!