K'NEX K-Force: Blasters You Make Yourself

BYOB: Build Your Own Blasters
By Danielle Doiron, 3 years ago 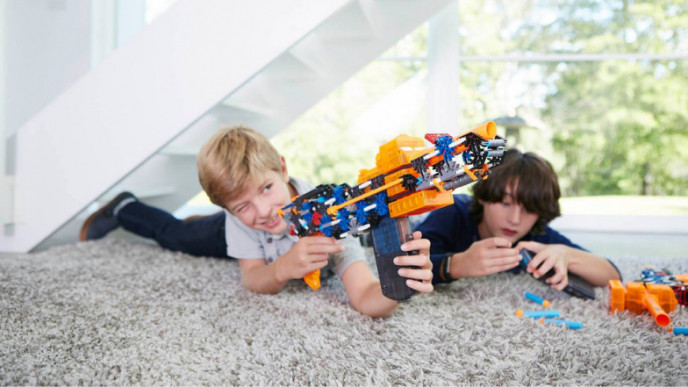 How cool are these?! I can't even tell you how many hours my brother spent building K'NEX rollercoasters when we were kids – but we wouldn't have been able to pry them away from them if these had been around!

The K'NEX K-Force series is an entirely new line of K'NEX toys – and in my opinion, they're some of the best yet. With K-Force sets, you can actually build (and use) blasters, bows and arrows and more!

To break it down, the K-Force toys are pretty similar to NERF blasters. But instead of buying a single pistol that already comes in one piece, you have to assemble your weapon before you can start shooting targets. Essentially, these are two toys in one. You put them together, play with them, and then do it all over again.

And I don't know about you, but I can definitely name a few kids who will LOVE these. My nephews aren't quite old enough for them yet, but I'm thinking of stashing away this Sabertooth Rotoshot Blaster anyway!

So far, I've seen a few of these sets available though the Best Buy and Walmart marketplaces, but the biggest selection is at Amazon Canada. One of the coolest kits I found there lets you build a functional (dart-shooting) crossbow. The Dual Cross Building Set is $60.49 and can shoot two blaster darts at once.

And when those darts inevitably end up lost behind the couch, you can pick up a 30-Dart Pack on sale for $17.36. Since you're shopping on Amazon.ca, most orders over $35 ship free.