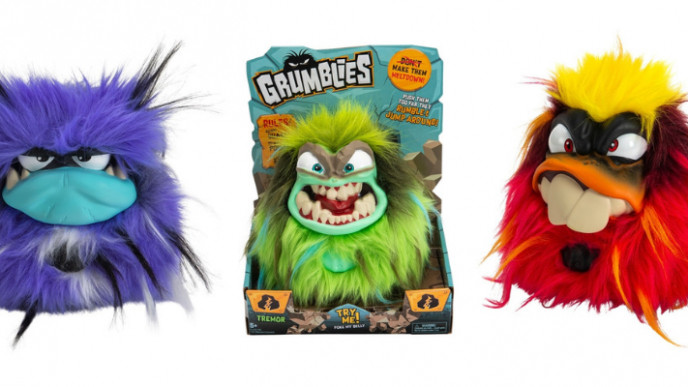 Let me introduce you to the grumpiest, angriest, meanest toys of the year. They're called Grumblies, and they're already a hit!

They just landed in Canada in early September, and I can already see them being pretty popular – so you might want to scoop one up while they're still in stock and on sale.

When I first saw them, I couldn't quite tell what they were – so let's answer the big question first: What are Grumblies?

To sum it up, they're interactive toys with MEAN tempers. Grumblies live apart from humans and are capable of utter chaos – like earthquakes and volcanoes. People have tried to tame them in the past, but let me warn you: messing with the Grumblies can lead to meltdowns.

Each one has a different personality and the ability to make 40 sounds and reactions. If you really want to push their buttons, poke, shake and flip 'em – but watch out!

There are four Grumblies. They aren't surprise toys, so you know exactly which one you'll get:

And let's be honest. We can ALL relate to the Grumblies. I mean, I'd have a meltdown too, if somebody kept pushing my buttons over and over again!

Amazingly, these mean-looking monsters are actually pretty affordable. Walmart Canada has the absolute best prices we've seen so far (at $19.88 each from $24.97). You can also find Grumblies for $24.99 a piece at Toys R Us Canada and occasionally on Amazon.ca (at a pretty steep markup).