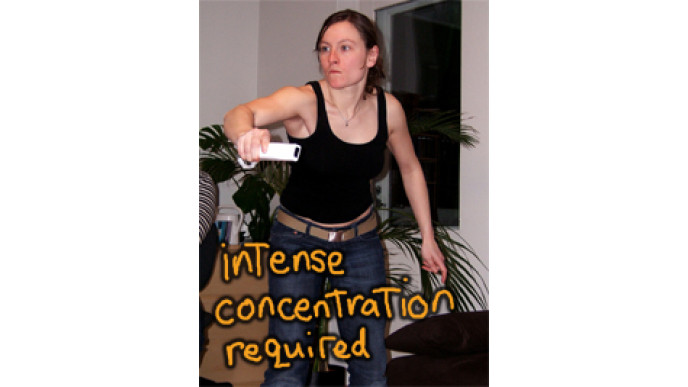 If you’ve been wondering and pondering whether to jump on the Wii bandwagon, I might have found you a good excuse to do so! Until May 16th 2009, Amazon Canada are doing a bit of a kickback offer on their Wii deals! Buy a Nintendo Wii, and they will email you a free $20 Amazon gift certificate, to spend on your next purchase.

The Wii is $279.99 from Amazon.ca, which is the standard price for the console.

Nintendo Wiis are great! I’m a bit of a PC Gamer anyway, so the transition over to the Wii games was not a problem. I will say that games on the Wii are quite different though, mainly due to the motion sensor being the focus of the gameplay.

A few months ago I bought Links Crossbow Training which comes with the Wii Zapper. I had read mediocre reviews, but as the game was pretty cheap, I thought I’d add it to my collection. I bought it, started playing, and was instantly addicted! It’s the kind of game I enjoy a lot. The levels are only a minute long, there are quite a few to choose from, so it holds my attention. As I have the attention span of a particularly inattentive 3 year old, this game really does it for me!

It’s the kind of game which is good fun to play with friends, over a few glasses of wine. You can play a level each, trying to beat the best scores. Warning – accuracy decreases with increased wine consumption!

I recommend spending your $20 Amazon gift voucher on the Links Crossbow game!