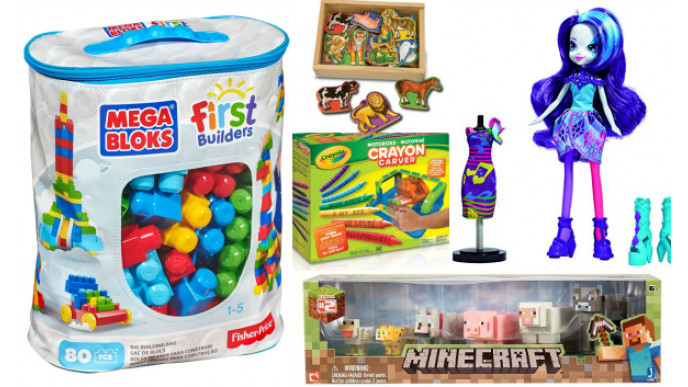 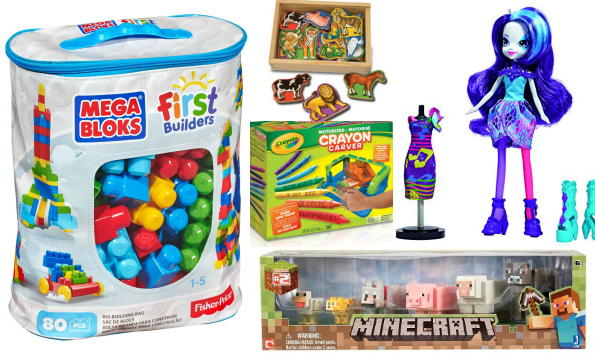 Amazon Canada has released a coupon code for an extra 30% off select toy purchases between now and Christmas Eve. Use the coupon code below on select toys that are already up to 68% off. This offer combines with the free Gund 2015 Annual Collectible Bear when you spend $100 or more.

This combo of deals is super-hot. You can really get some great toys at an amazing price when you combine the sale toys with the coupon code. Here are some of the best deals in my opinion. This My Little Pony Equestria Girls Rainbow Rocks Rarity Dollwith Fashions was $24.99 but is not only $8. After coupon code, you will pay just $5.60.

Minecraft is super popular right now and I couldn't help but share this deal on a Jazwares Minecraft Animal Toy, 6-Pack. Originally $49.99, the set is currently on sale for $29.42. After coupon code, pay $20.59 for this six-pack of Minecraft animals.

Let's talk other popular toys. This Magformers Amazon Exclusive Dinosaur Set (65 Piece) is also pretty popular this year but these things cost a pretty penny. Originally $158.99, this set is now on sale for $108.40. After coupon code, pay $75.88.

When i was thinking of popular themes this year, Transformers came to mind. ThisTransformers Generations Leader Class Armada Megatron Figure was $69.99 and is on sale for $43.14. After coupon code, pay $30.20.

I also like to go back to basics when I see toy deals like this. This Mega Bloks 80 pc Big Building Bag (Classic)would make a great gift for your own kids or other people's children. You can buy one, two, or three as the bricks combine with each other. With building sets, more is better. Originally $19.99, this set is on sale for $14.97. After coupon code, pay $10.48.

Melissa & Doug wooden toys are insanely popular and this Melissa & Doug Magnetic Wooden animals should be a big hit at this price. Originally $12.99, the set is on sale for $9.99. After coupon code, pay $6.99. These are just a few of the great deals available at Amazon Canada right now. Receive free shipping on $25 or more.