Is It "Child Abuse" To Let Your Child Tattoo You?

By Brooke Wilson, 7 years ago 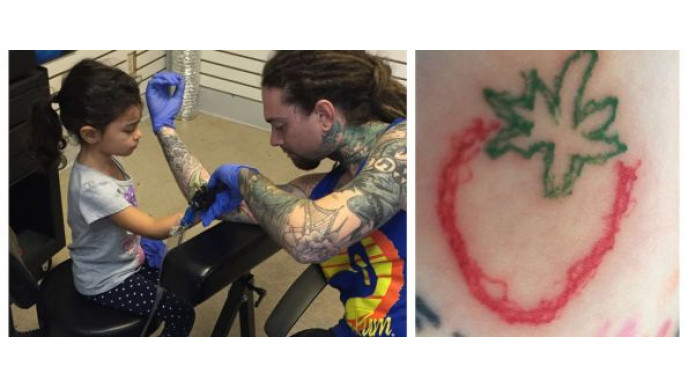 Here's a question for you Moosers! Is it an offensive act to let your child give you a tattoo? I think when my son is old enough to write, I will let him write his name on me somewhere. But then again I already have several tattoos. Some Canadians are calling this act "offensive" or "child abuse" but what do you think? There is a Florida tattoo artist who let his four year old daughter give him a tattoo. She drew an image of a strawberry on her father's arm in permanent tattoo ink. Yes, with a tattoo gun.

Her father posted an image of the finished strawberry on Facebook of course, and soon after the image was under fire. The image had been reported for "graphic violence", "child abuse" and other reasons. But really, is this considered abuse or violence? I understand that it is a little alarming that a child this young was allowed to operate a tattoo needle, but I wouldn't consider it abuse or violence by any means.

The father added that he discussed the whole idea with his daughter before actually attempting the task. They had agreed on the image of a strawberry prior to even entering the tattoo parlour, and had thought about the task ahead for quite some time. The strawberry has meaning to both father and daughter in this story. The dad says that they sang some nursery rhymes to pass the time while she drew the adorable little strawberry on her daddy's arm.

The little girl didn't have complete control over the tattoo machine of course. Her dad controlled the foot pedal that turns the ink gun on and off. That way he could prevent any accidents or pokes - for the little girls safety mostly but also to control the angle of the gun on his arm. He also said that he even guided the machine with her. This photo has definitely gone viral, and I can understand why. There is a lot of controversy. Some people think this is child abuse, and others think it is a cute idea and would do it themselves. For this father and daughter, the dad says:

It doesn't matter what they think. My daughter's happy and excited. She is proud of it!

So Moosers, should a child be allowed to operate a needle to give their parents a tattoo?