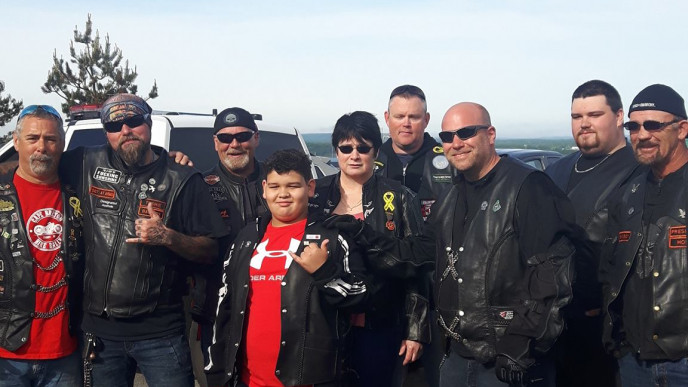 It was touching earlier this week when hundreds of bikers escorted a 10-year-old bullying victim to school in Sydney, Nova Scotia.

Dressed in leather, the bikers drove the Grade 4 student to school and walked him right through the school doors in a show of support for the boy, who was picked on by other kids because of his race and weight.

It was an emotional site for onlookers, who lined the street to clap and honk their horns.

But it underscores a serious problem: bullying shouldn’t have happened in the first place. It’s an issue that hits too close to home for many students and their parents. According to the Canadian Red Cross, 89 percent of Canadian teachers said bullying and violence are serious problems in public schools. In one study involving Toronto junior high and high schools, nearly half of students surveyed said they had been bullied online. But it happens in public too. Over 80 per cent of the time, bullying occurs when other students are present. When a bystander steps in, bullying stops within 10 seconds 57 percent of the time.

In the Nova Scotia bike rally, organizers were compelled to act after the boy’s school and education officials failed to help him.

According to reports, the boy was bullied every day. His clothes were ripped off on the school bus and other students threatened his life.

Three children with the Cape Breton-Victoria School board lost their lives this year, including a 13-year-old who commited suicide on June 18, having been the victim of cyberbullying. The board is calling on the provincial government to discuss bullying and cyberbullying.